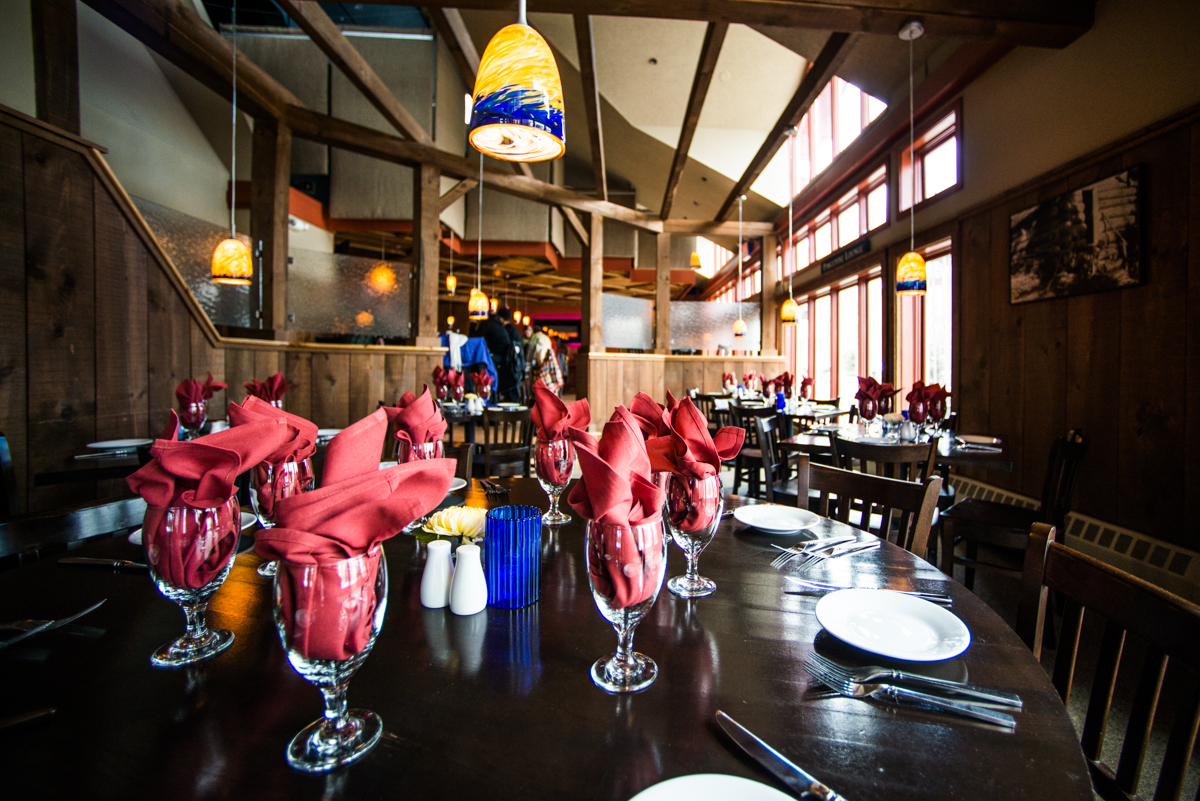 On our Fall excursion to Vermont, we were rewarded with usual benefits of being in nature. The crisp September mountain air and the breathtaking views afforded to us by an arduous hike to Stratton Mountain’s summit left us invigorated. It also left us with quite an appetite.

When it came time for dinner in town, we experienced the culinary delights offered by the centrally located Fire Tower Tavern, which was founded by Peter Micioni in 2013. Micioni had been coming to Stratton for many years as a skier, and after retiring from New York, he wanted to use his passion for dining to build a Vermont comfort-fare rustic dining experience. “I knew the resort and clientele very well,” said Micioni on his decision to make the leap to becoming a restauranteur. “I felt it was a risk worth taking. I just had to convince my wife. My kids helped with that.”

It was obvious to us that the risk was worth it. The Fire Tower Tavern has become a popular hot spot for both locals and tourists alike with their Vermont-eclectic menu. But Micioni does admit that it wasn’t always an easy road. Originally, he and his family struggled to find a name for their now-iconic restaurant. “Generations of families have been calling Stratton home since the 1960s. I wanted a name that would connect with the resort and homeowners,” says Micioni. “We were sitting around the table and I blurt out to the kids, ‘What does every family do when they come to Stratton?’ My son said, ‘Everyone hikes up to the Fire Tower.’ BANG. That was it.” 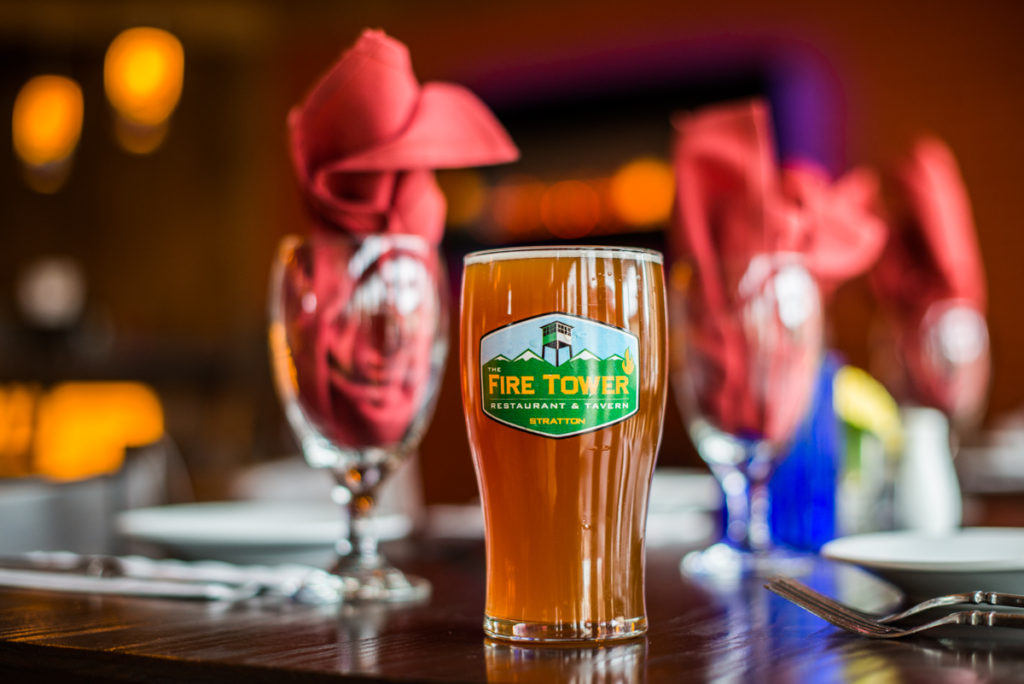 In true mountain style, the restaurant offers rustic warmth paired with a modern vibe. The Fire Tower Tavern caters to both regulars and out-of-towners, offering handcrafted libations from their inviting bar, an eclectic seasonal menu, both indoor and outdoor dining options, and an overall unforgettable dining experience.

We began our night with a cocktail hour at the bar with “G,” short for Giovanna. G clearly has a passion for mixology. The menu offered a variety of unique handcrafted drinks, but she strongly recommended we try their famous “Bacon Old Fashioned,” which features bacon-infused Makers Mark, VT Maple Liqueur, muddled cherry, and orange, topped with soda and served with a bacon garnish. This cocktail more than lived up to its reputation as a local staple and was certainly our favorite as well. 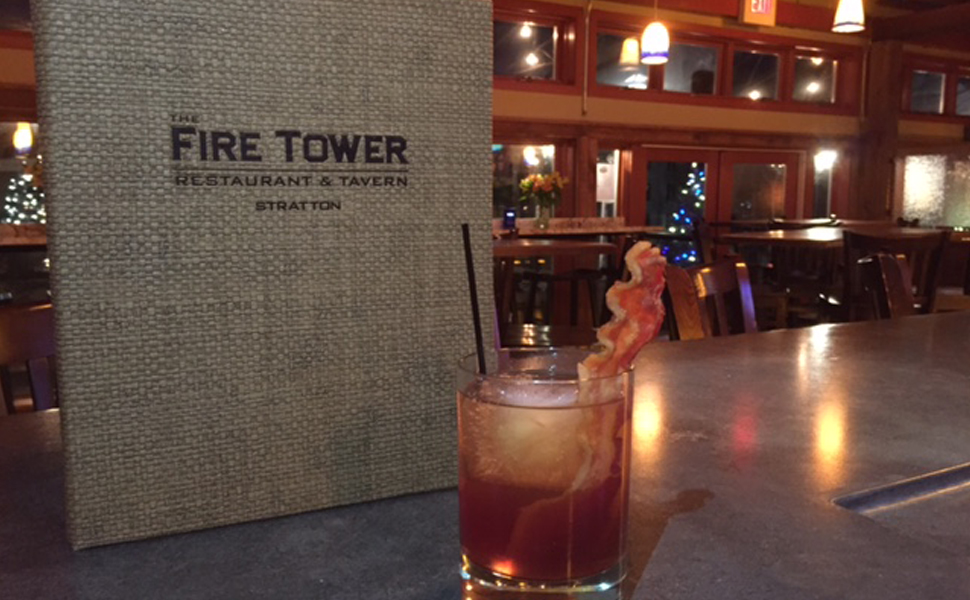 G also had us try the “Pimm’s Cup,” another local favorite popular during every season. The tawny-colored gin-based liquor, Pimm’s No. 1 Cup, is the foundation of the eponymous cocktail. In the 1840s, James Pimm, the exalted landlord of an oyster bar in London’s financial district, invented and marketed it as a health tonic. And for the non-drinkers in our group, G crafted a delicious mock-tail called the Mint Summer Spritzer.

Fall was in full season at Fire Tower. Over drinks, we perused their diverse selection of seasonally inspired dishes. Finally, we decided to start with a sampling of small plates, including an order of Cider Scallops and their famous Fire Tower Shrimp. Our favorites were the Jerk Chicken Wings and Ahi Nachos, which consisted of tuna tartare, crispy wontons, pickled onions and wasabi aioli, hoisin lime, and daikon radishes. This delicious dish is lighter fare, and is the perfect alternative to traditional bar nachos. 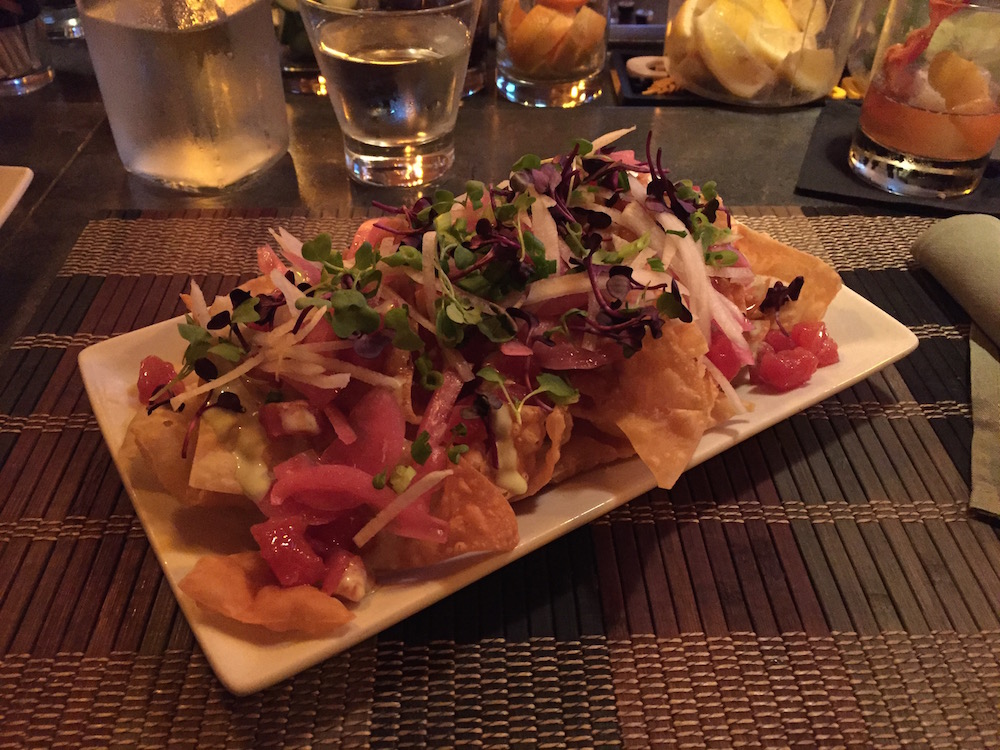 The Fire Tower Shrimp and the Ahi Nachos are signature dishes at the Fire Tower Tavern. Chef Max is the creator behind the Ahi Nachos while Peter and his wife, Beth, created the Fire Tower Shrimp. According to Micioni, there is a friendly competition almost daily on which dish sells more. We could only guess that the competition between the dishes must be fierce. Having enjoyed both dishes, we were unable to decide which we liked best.

Next, we had an Autumn-inspired pasta dish sourced from a local pasta maker, which consisted of mouthwatering North Country smoked organic chicken breast, crimini, tangy sundried cranberries and toasted hazelnuts, and tender baby spinach. We paired this with a Guenoc Valley Pinot Noir, which complimented the smokiness of the chicken nicely.

For our main course, we elected to try an eclectic mix of two seasonal favorites. The Fall menu’s elk steak was specially chosen by Chef Max and was the perfect meal after the long day we had spent on the mountain. It was prepared with caramelized onions and currants and served on a bed of rocket salad, a savory horseradish-infused mix of mesclun and arugula greens.

Our meal was delicious and satisfying, but we still couldn’t pass up dessert, which was a smorgasbord. The first thing we tried from our large platter was a was a hearty slice of a peanut butter mousse pie with a chocolate chip and peanut crust, drizzled in chocolate and a side of homemade whipped cream. Next, we dove into a decadent oreo and chocolate mousse torte, which was nestled between two scoops of vanilla ice cream encrusted in a chocolate shell.

Peter Micioni, Chef Max, and G at the Fire Tower Tavern provided us with a memorable Vermont dining experience, which was the perfect end to our Fall getaway to Stratton Mountain. We look forward to returning during the Winter season, and will be certainly be visiting G and Chef Max after a day on the slopes!