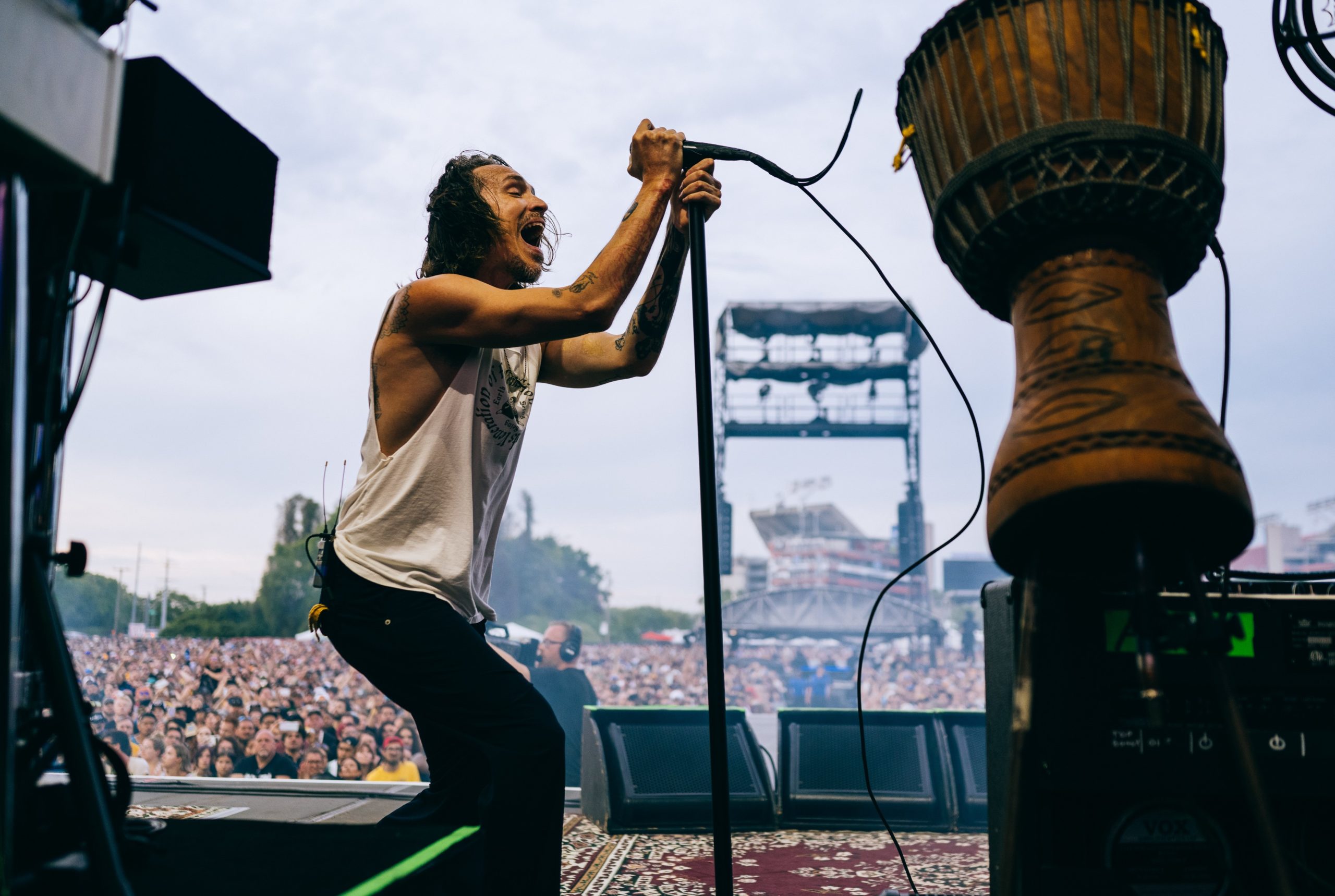 Brandon Boyd is an acclaimed visual artist who happens to front a little rock band called Incubus in his spare time.  Christopher Baldi caught up with Brandon as Incubus was making their ecstatic return to live music at last week’s Innings Festival in Tampa, Florida.  Here’s Brandon Boyd on creativity, ritual, his new outlet Moonlight Arts Collective, and how to surf during a pandemic.

CC:  Let’s start with The Moonlight Arts Collective, which is your assembly of artists working outside of the mediums that they’re known for.  Can you talk about the genesis?

Brandon Boyd:  It was during the pandemic, while we were all in this weird forced isolation moment and drip-drip-drip media situation, and I could only do what I know how to do, which is focus on art.  I was writing a lot of music and painting, and I did a small handful of print releases.

I’ve been doing these sort of fine art releases for 13, 14 years now, and during the pandemic they’d click out really fast.  It surprised me because it seemed like a weird moment for people to buy art, but I have a half-baked theory that it’s because people were trapped at home, looking at the blank space on their wall that they’d always intended on filling.

CC:  Is it completely free form, for any of your collaborators to showcase anything they want to share?  Or are you aspiring to a particular level of artistry, to really build a brand around?

BB:  It’s a little of both.  It’s a bit of a curated process, starting with people in my extended circle.  And now that we’ve officially launched, we’re reaching out to other multi-creative people who I haven’t met but admire, to invite them into this fold.

I have high aspirations for this project, because I’m fascinated by creativity as a phenomenon. It’s one of the human experiences that’s probably least understood. For me, I’ve been drawing, painting, writing songs for as long as I can remember, and I’ve done my very best to understand it, but I only have the most rudimentary understanding.

Creativity often feels as if humans are more like the pen, and the ink is coming from some place else, and the more in flow you are, the more it feels that way.  So it’s like you’re opening up a vessel and the information floods through you, and what we get in the differentiation between artists is their interpretation of what’s flowing.  Does that make sense?

CC:  I think it does.  It reminds me of something Chris Robinson from The Black Crowes said about songwriting- basically, that there’s no such thing as multiple songs, only one universal song that every songwriter taps into when their craft is finely tuned.

BB:  That actually reminds me of the mythologist Joseph Campbell.  His whole central thesis is that there’s only one story, and there are only a variety of folk interpretations, depending on where and when you are in the world.  And we’re still to this day telling the one story.

CC:  And consider how many great songs are actually just new slants on the same old four chords.  You can’t just retread what somebody else has done, but on the other hand, I’ve heard a lot of artists say, “there’s no such thing as an original idea.”

BB:  I agree with that, actually.  We’re all playing with the same finite tools in music.  There are only so many keys on the piano, and only so many frets on the guitar.  But the ways in which artists can interpret that finite number of tools are limitless.  I think it all depends on who’s interpreting the information that’s flowing through the ether, or wherever it’s coming from.

CC:  When you sell millions of records as a musician, does that inform your work as a visual artist with a sort of rock star confidence?  Or is it intimidating to work in a medium where you have a brand new audience and new critics?

BB:  It’s deeply challenging to approach a different creative medium, and to attempt to build something up from the floor again, after having built something else from the floor and gotten to high positions of confidence.

It’s funny, because that being said, my default position as a quote-unquote rocker is not one of confidence.  It’s been one of continual self-critique, to the point where my inner critic has done its very best to shoot myself in both feet at the most inopportune times.  And so part of my karma has been to learn how to have a better relationship with my inner critic.

CC:  It’s interesting that you talk about that inner critic.  As a fan, I remember seeing you live for the first time in ’99, and multiple times over the years, and you guys got better and tighter every time.  The last few shows I saw, you guys were such a tightly-knit live animal.  Do you feel the same way about your live music career, or is there more of an ebb and flow?

BB: There’s definitely an ebb and a flow. But I can speak for everybody in the band when I say that it matters more to us now than ever. The older you get, the more hyper-aware you are of time, and how much of it you don’t have. (laughs) You try and make the absolute best of the time that you’re given.

If it’s an hour or two onstage in front of people who have paid good money for a ticket to come and be with you, that’s the most precious gift I could possibly imagine for these five knuckleheads who grew up just like, making noise. The fact that at the very least, we’ve captured somebody’s attention, for a brief period of time- we take it seriously.

We’re attempting to be hyper-present, and nowhere else but right in that very moment.  And with a big group of people, they’re all hyper-present too…  if it’s going well.  (laughs)  I have my feelings about when a thousand people bring up their cell phones between their face and yours.  It’s not for me to decide how people experience live music, but I have a special place in my heart for the fan who refuses to take out their phone during a concert.  To me, that’s a much more beautiful interaction.

CC:  I feel like it’s finally becoming uncool to take out your phone during a concert.  At some of the recent shows I’ve seen, I got the sense that nobody wanted to be the first one to take out their phone and open their apps.

BB:  I hope that’s happening!  Now that I’m thinking about it, we did a really brief run in September 2021, and I think you’re right, there were less cell phones at those shows.  And it didn’t occur to me in the moment, because I was more like, “I can’t believe it, we’re all here together, we’re playing concerts again!”

CC:  So what was that first show back like, after being forced to take a time out for almost two years?

BB:  It was a bit like riding a bike, you got back on and there it was again.  But there was also this super wide-eyed, heart-exploding-out-of-your-chest feeling, to the point where you’re squeezing tears out of the sides of your eyes.  Especially in a culture that seems to be siphoning out all versions of ritual from its daily practice, it reminds me how much we need this communal gathering, sharing of space and sound.

There are wonderful things about modernity. I love my air conditioning, I love my coffee bean grinder, but so many rituals are made to seem unnecessary by modernity, and that couldn’t be further from the truth. We so desperately need our collective rituals, and concerts are a great version of that. We all gather together in the same room. We surrender individual identity to a collective identity for two or three hours. We all sing the same words together and emote together. Not being able to do that for two years was kind of devastating.

CC:  That brings me back to the pandemic.  What was it like for you as a lifelong surfer while California was so locked down?

BB: California had really strict measures.  So much so that you weren’t even allowed to go in the water.  There were days when it was just firing at my local breaks, and I would drive down just to watch the surf, and my heart was like…  (groans).  And some of my buddies would suit up, leashes attached, and they would wait for somebody else to go out.  And then, while the cops were taking that first guy away, they’d rush out and get, like, the best ten waves of their lives, with nobody around, and then they’d leave before the cops came back.  Knowing what we know now, some of those restrictions seem so stupid.  (laughs) You can’t get it from fish.

Check out Moonlight Arts Collective, where you can request an invitation to online membership.  Meanwhile, catch Brandon Boyd on tour with Incubus this summer- and kindly resist the urge to watch the show through you cell phone.