Donavon Frankenreiter began surfing at age ten and by the time he picked up a guitar at sixteen, he had gone pro. He now tours the globe playing his bluesy brand of feel-good vibe music and surfing exotic locales along the way — all the while inspiring people with his personal brand of do-good positivism.

The Conscious Connection team caught up with Donavon in the green room before his show at the iconic Stone Pony in Asbury Park to chat about surfing, music and where he gets all his awesome outfits.

Conscious Connection: It’s great to be with you Donavon. We want to talk to you about your album that came out last year called Start Livin’. Can you tell us about your inspiration for that record?

Donavon Frankenreiter: I went to the studio of my longtime bass player in California and we made the entire album in seven days. I would play a song on the acoustic guitar, and he would choose a different instrument such as a ukulele or banjo. Then we would play together, me on the guitar and him on a different instrument, and record the track just like that. Sometimes we would sing while playing, other times we sang over the track which was awkward for me as I like to be part of the track. We would record three times, then choose the best recording.

Conscious Connection: Very cool that it was more of like an organic process. So did you write the songs there?

Donavon Frankenreiter: No, the songs were written over a year and half while on different tours. I don’t have a schedule of when and how to write songs, I just write when I can, based on events and feelings at the time. I write in hotel rooms, about family, about the feelings I had when Andy Irons passed away. It’s not easy to write songs; they just happen when they happen. At the moment I’m working on a new record but I only have four tunes. I need to get at least another eight or nine songs!

Conscious Connection: What was different about this album compared to previous albums?

Donavon Frankenreiter: I have a previous album called Glow, which was very ‘poppy’. I used a producer called Mark Weinberg. I would play, and he would produce the songs according to his interpretation, which ended up being the most ‘poppy’ album I have produced. Before Glow I produced an album called Pass it Around in a big studio with Joe Chiccarelli, and then I produced an album by myself in a studio in Florida. All the albums sound different because you have a producer, show them the songs, and the end result is their perspective of what it should sound like.

I’m interested in finding another producer for the next record, and doing something a bit different. I’d like to ask people I’ve known or played with over the last ten years to produce one track and make an eclectic record. People like Jackson Brown, Jack Johnson, G-Love, etc. It may be a fun record to do. I would go to their studio and record their version of the song using their choice of instruments. Each track could turn out reggae, country, who knows!

Conscious Connection: When did you get started playing guitar? Did you surf first?

Donavon Frankenreiter: When I was 10 I got my first real surf board, and I received my first guitar at age 16, which was also the year I took up professional surfing. I took the guitar with me on surf tours, and played in a variety of different bands. I never used to sing, and I got so sick of playing covers. When we were playing people wouldn’t even pay attention to our originals. I didn’t want to be a human juke-box, playing covers just to pay the rent. Then my wife said I had to write my own songs and sing. I took a week off from surfing and wrote my first song which I sang to her. Then I wrote four more songs and made a demo. A year and half later I made my first record with Jack Johnson.

Conscious Connection: So you have known Jack for a while?

Donavon Frankenreiter: Yes, the first time I went to Hawaii I stayed at his house, which was the hangout for all the guys. Everyone wanted to make live music, even Kelly Slater and Rob Machado was playing music back then. At the time I was 16 and Jack was 14 — he played music a bit but he was more into filming, then he went away to college, made this record, and his career exploded from there.

Conscious Connection: How do you balance travelling on tour and surfing?

Donavon Frankenreiter: I surf as much as I can, wherever I am. I have a board on the bus so I’m always ready. I will also ride anything – wave machines, boat wakes, river waves. Even if there is no surf I like to swim or just be in the water. You can find waves anywhere in the world, and there is always people who surf. Just recently we were in Germany surfing in a river with these hardcore locals — it was wild!

Conscious Connection: What kind of boards are you riding these days?

Donavon Frankenreiter: I ride Hobies. They have heaps of great types of boards, and they sponsor me. Hobies has been making boards since the 1950’s, and they still use the old templates. They have five shapers who are incredible, and make a variety of boards from small four fins to epic single fins. When they make a board it’s hard to tell if the board is old or new.

Conscious Connection: Any other exciting plans for the future?

Donavon Frankenreiter: I’m touring until the end of the year, and at this stage I just want to get through this year! I want to write songs, and get home as much as possible as I really miss my wife and kids, but it’s good touring too. I get to travel all over the place and play music and surf, so I never get bored. Every night is totally different. The audience will change, the sound changes, the venue changes, each crowd has a different vibe, and we try to go with the atmosphere at the time.

Conscious Connection: On stage do you notice a difference in people in different places?

Donavon Frankenreiter: There are no rules about music, so music fans are generally the same. Music tends to unite people, and I feel like when I’m playing everybody speaks one language, no matter where I am in the world. Looking at the audience, they all look like one, but then they speak and you are reminded that you are in a different country.  Sometimes it’s different, like if you’re part of a giant festival with lots of bands, you can notice the different reactions to the music. Every show is different, and each country has a different energy. Our biggest market is Brazil, where they take what you give them and do a lot with it. Japan is interesting – sometimes they go wild, but then they get dead silent all of sudden and you’re taken aback. I guess they’re just really polite and want to hear everything.

Conscious Connection: We’re all musicians and surfers here, maybe you can give us one piece of advice that’s really helped you to have an impact and take your music to the next level?

Donavon Frankenreiter: The main thing is do what you love, whether it’s sound, or playing bass, or singing. Enjoy the moment, whether you’re playing in a garage with friends, or in a room with one person. There is something special about music. If you have fun and are passionate about what you are doing, you can never lose or fail.

These are exciting times as there are so many opportunities. You can create one awesome song and a good video, put it online and it goes viral. There is so much great music out there and the ability to record music is so accessible compared to when I was 16. To go to a studio and record was really radical, nowadays every second person has a studio in their room!

Conscious Connection: So our photographer is dying to know, where did you get that awesome hat from?

Donavon Frankenreiter: I love my 1970’s Stetson from Colorado which says John B. Stetson. I met this guy at a show in Brackenridge, and he invited us to his house. Turns out he was a kind of antique dealer who has a house full of amazing articles, all for sale. I scored this hat from there, as well as lots of other things. Now our bus is full of stuff, including vinyl records, hats, shirts, crystals and gems — you name it!

Conscious Connection: Right on! Thanks so much for taking the time to speak with us. We look forward to seeing you again when you roll back through town.

Donavon Frankenreiter: My pleasure! Thanks so much for having me.

Be sure to catch Donavon live at one of his concerts: Tour Dates & Upcoming Shows 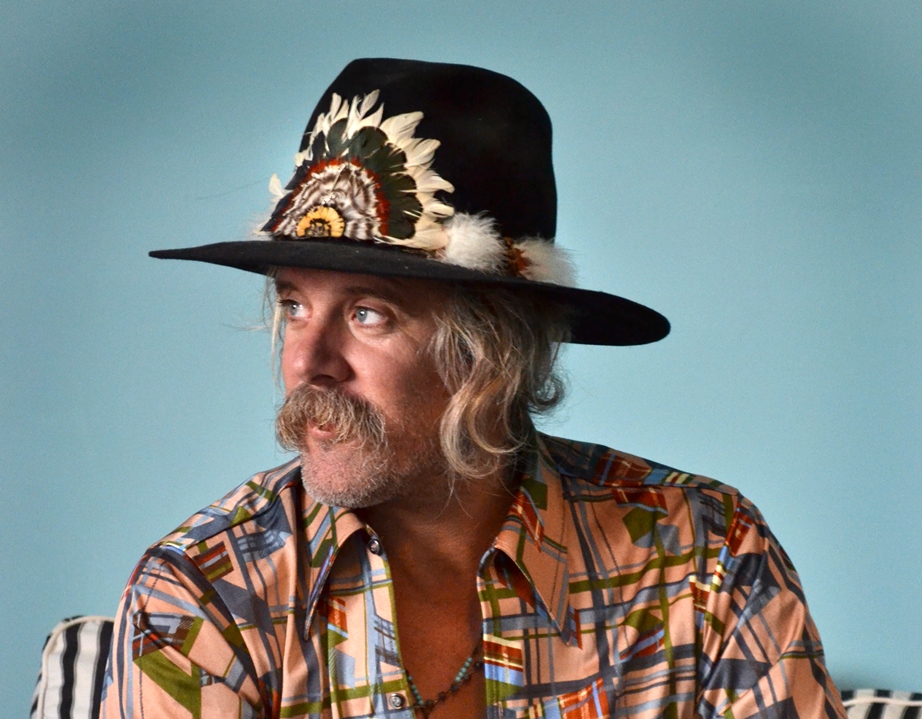