The Need for Emission-Free Sailing

Look around. Look left to right. What do you see? Maybe you’re sitting in a new office chair, or you’ve pulled up the blinds in front of you to let the sun in. Many of these items you use on the daily have been shipped via boat to get to a port near your home. In fact, 90% of the things we use every day have been shipped over open ocean. You’re thinking, So what? My chair works great, and my blinds aren’t waterlogged. Most individuals do not think about where these products come from, let alone the emissions of the cargo ship on which they were transported. This is why SAILCARGO Inc. has set off to tackle clean shipping via emission-free sailing.

Proving The Value Of Clean Shipping

The unseen side of the cargo shipping industry is disastrous to the Earth’s climate for many reasons. The industry is “regulated” by the United Nations’ International Maritime Organization. However, companies rarely receive repercussions from harmful, illegal actions like “burning the sludge collected from the bottom of the fuel tanks in open barrels.” From ship building to ship breaking, the global shipping industry produces more greenhouse gas emissions than most countries do in a year, according to an Oceana report.

“This is the first time I’m saying these things to a journalist. But I believe that this vessel, now that it is announced, will be the undisputed leader in clean shipping globally,” said Danielle Doggett, the Founder and CEO of SAILCARGO Inc. “We are an emission free company, and we want to make a mean, green sailing machine.”

After years of construction on the world’s first-ever emission free, wooden cargo ship called Ceiba, Doggett and the team at SAILCARGO Inc. have just announced plans for MAMBA. The announcement was made today at the United Nations’ Conference of Parties (COP) 26 event in Scotland.

SAILCARGO’s first ship called Ceiba will be sailing by 2022. At that time, the 150-foot (45 meters) vessel will be able to haul about 10 containers of cargo and projected to be seaworthy for 100 years (with the proper maintenance). This small step towards a future full of clean ocean cargo sits in a shadow cast by today’s largest freight liners. For example, large cargo vessels can carry over 20,000 shipping containers, have a 20-30 year lifetime, and often burn close to 2,000 tons of fossil fuels per day (or 63,000 gallons), according to Freight Waves.

The announcement of MAMBA is a big step forward for SAILCARGO Inc. as well as the clean shipping industry. When constructed, the new ship named after the fastest deadly snake on the planet will be the only emission free ocean-going vessel of its size. MAMBA is currently in the design phase—attracting clients and investors. The MAMBA concept is being adapted from existing, ocean-going vessels. What’s more, the ship will utilize current day technology, and once construction has begun, the MAMBA will take two years to build.

“We are absolutely the underdog here,” said Doggett as she verbally painted MAMBA’s picture. “This is a concept that works and we’re gonna prove it. We’re gonna make a fleet and everyone better get out of the way, because this is actually happening. I want these big companies to feel insulted. They have so much more power [than SAILCARGO Inc.] and they should already be doing this.”

As of now, there aren’t any zero-emission cargo ships on the ocean. With greater investment and further partnerships, SAILCARGO Inc. has potential to upset the cargo shipping industry.

“There are other vessels, one is called the Oceanbird,” said Doggett—referencing a Swedish ship to be constructed by Wallenius and Alfa Laval by 2024. “They have huge money, and they can easily squash us or go faster than us. There’s no competition. But the thing is, that their vessel will use, according to our in-house calculations, about 10 tons of fossil fuels a day.”

There has long been a movement in the shipping industry to save fuel. The Oceanbird, for example, touts 90% fuel savings. “We’re not doing fuel savings,” Doggett reminded. “We’re not doing slow steaming. I don’t care about that because we want to have an aggressive, emission-free vessel that is fast.”

In order to build MAMBA, the SAILCARGO team is engaging with an architecture firm called Dykstra Naval Architects. The SAILCARGO Inc. crew is also working with hydrogen specialists—AdAstra and Ballard. MAMBA will sail and utilize clean hydrogen energy. The SAILCARGO crew plans to build the vessel and are currently looking for private investment as well as a shipyard to do so.

“We’re engaging with the architect to build six, but we’re starting with one,” said Doggett. “When I spoke to the architects, I showed them that this is a proven design that actually has two private yachts already launched. If you were to look at the yacht Maltese Falcon or the yacht Black Pearl. These are the vessels that have inspired the MAMBA. So, we will use that same technology of the sails, which are called DynaRig. We’ll be using existing technology that is proven, and those boats sail. Those two yachts are performance machines.”

She’s quiet and sweet, but feisty when it comes to the vision of her company. Danielle Doggett is fired up to change the cargo shipping market and possibly the world as we know it. Born in Ontario, Canada, Doggett attended a nautical college in the Netherlands where she received a 210 Offshore Sail-Endorsed Master’s license.

“I began sailing on traditional tall ships when I was 13-years-old on the Brigantine-St. Lawrence II, which is out of Kingston, Ontario and the Great Lakes,” explained Doggett. “And ever since then, I’ve more or less dedicated my life to sea.”

On one of her sailing trips out of the Dominican Republic, she met a good friend, Lynx Guimond.

“He and I sailed across the ocean with 18,000 bottles of rum to Pele in the North of France. That was really fun,” remembered Doggett. “Then eventually he wrote an email to our friend group and said, ‘Hey, we’ve always talked about building our own ship. Who’s going to put their money (or their hands) where their mouth is. I told him that I would love to write the business plan for it.”

It took less than two weeks visiting Guimond in Monteverde, Costa Rica for the crew to determine that it would be the business’s birthplace. Guimond, Doggett, and third founder John Porras started the company with their first ship in mind, called Ceiba.

“Ceiba is funded entirely by investors. It is estimated to cost $4.2 million US dollars,” said Doggett. “Lynx and I came into this with approximately $7,000 US. We did a 30-day kickstarter campaign where we raised $30,000 in one month. That was donation. That was us asking the world, ‘Do you want to see this project tried? This is going to be a for-profit company, but we don’t have any money whatsoever.’”

Humble Beginnings to a Bright Future

Even before introducing the plans for MAMBA to the public, SAILCARGO Inc. was awarded and recognized for the best example of relations between Canada and Costa Rica. This award was presented by the Costa Rican ambassador who lives in Ottawa, Canada. Going into the future SAILCARGO will finish Ceiba in 2022 and will also add another ship to the Ceiba line shortly after.

What’s more, the November 1st announcement of MAMBA is expected to shake up the ocean shipping market. Soon after the first MAMBA ship is built, a fleet of six additional emission-free sailing ships will follow.

Doggett and her crew have also been quietly working on a non-profit company called Astillero Verde which means “green shipyard” in Spanish. This effort will directly benefit the coastal communities in Costa Rica through tree planting.

“I’m beside myself with excitement,” admitted Doggett. “We’re very small but we’re attracting very large players. We’ve been pretty quiet about it. But this [MAMBA] project marks an advancement. Our mission is to prove the value of clean shipping. And we’re doing that by launching large, ocean going, energy-autonomous, emission-free cargo vessels. And we want to prove that they are environmentally, socially, and also financially viable.” 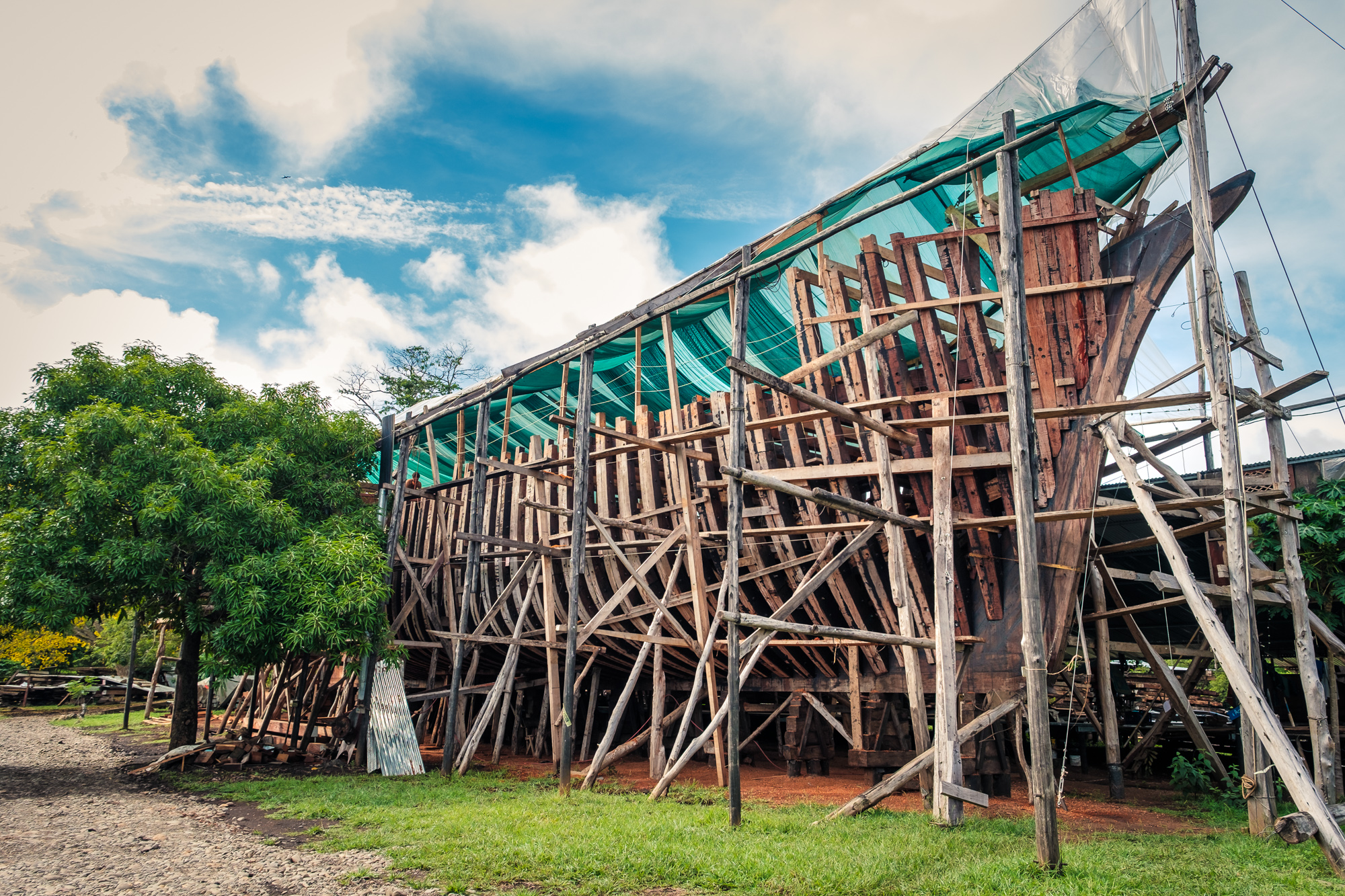