Folk-indie-world-musician Trevor Hall has drawn influence from the profound cosmic playfulness often found in this paradoxical life. Buddhist, Hindu and non denominational philosophy have filled his song books, saturating the air around his ever-growing fan base with forgiveness in an unparalleled era of impossible and overbearing culpability.

Social activist, and dear friend Nahko (of Medicine for the People) has teamed up with Trevor on a joint tour to spread their collective message of personal liberation, and external call to change throughout Europe. With nearly every stop of their first leg selling out, there was no better place to sit down with Hall and meditate on his mission than their jump-off point – Whelan’s, Dublin.

Mike Finnegan: Welcome to Ireland, Trevor. Dublin is the first stop of many across Europe with Nahko, what can your European fans expect from this two-leg tour this Spring and Summer?

Trevor Hall: It’s really special you know..  For us to be touring together since we’re such good friends and wrote a lot of great songs together, it’s just really special. We’re finally able to perform a lot of those songs together live, which we never really get a chance to do back home. So the fact that we’re able be on stage together is like a gift for us, no matter where it is.

But it is really cool for me as my first time in Europe. I don’t even know what to expect. I think that’s kind of fun – there’s this whole element of spontaneity at these shows.

MF: It really is a perfect partnership. With your leadership in the discipline of spiritual consciousness and awakening, and Nahko’s call for social change – it only makes sense. How did you two first meet?

TH: We met through a friend of ours called “Uncle Joe” who actually we actually wrote a song about. He’s kind of like one of our uncles I suppose, or one of our Elders.

He sent me a YouTube video of Nahko playing out in the land somewhere in Oregon. And he’s like, ‘You’ve gotta check this guy out! I’ve had my eye on this dude for a while, and we’re gonna bring him to our festival’ – because he used to put on a festival every year. So eventually that’s where we met, at Uncle Joe’s festival a few years later. It must’ve been either 2011 or 2012. It was right before my album Chapter of the Forest.

MF: I noticed Chapter of the Forest has some Native American themes, the track “Obsidian” in particular. Did Nahko influence that creative direction at all?

TH: Nahko actually inspired the song “Obsidian”. That song came through pretty much straight after I saw him play live for the first time. I remember thinking, ‘Woah, there’s a spirit coming through this kid,’ and “Obsidian” was really an ode to that spirit.

MF: Buddhist philosophy and the promotion of mindfulness really shines through in your music. What advice would you pass on to fans looking to heal themselves internally?

I hope the music, in a way, helps spark their journey within. It’s hard, because a lot of the songs feel like they’re being sung to me. It’s as if they’re really healing me. So I would have to just say all of the cliché things: do what you love, listen to your heart – just try to be aware.

When we open ourselves up to that Great Spirit – or whatever you prefer to call it- when we put out the call with a sincere heart, it’s going to be answered in some way. We just have to be open to it. It’s just about being sincere, and opening up, and asking for the healing, or asking for the guidance. It’s all about sincerity of heart.

MF: Do you find opening yourself up also attracts the Muse?

TH: I think the Muse attracts me, really. Song writing isn’t something where I can go, ‘Ok, I’m gonna sit down and write a song.’ For me that’s not how it goes.

I could be out just enjoying my day, and then [snaps fingers] it starts coming. It’s a feeling I get, and I know, ‘Right, I have to sit down’. It’s the muse attracting me, and pulling me in. It’s just staying aware, and listening to those feelings when they come.

MF: The impermanence of life can be daunting, and tormenting to the untrained soul. How do you think we can use the imminence of impermanence to live brighter, fuller lives?

TH: When we think about impermanence, there’s a lightness that comes to the heart. I don’t want to say it’s a carefree thing, because I think that attitude can be kind of destructive, like ‘Oh, I can just do whatever I want, fuck it.’ I don’t really think that’s healthy.

The Shamans take in the darkness. They don’t turn away from it. Because it’s the dark that shows us the light. If we accept death – impermanence – if we accept that stage, we think that it will take us over, but I think it does the opposite. I think it gives us life. That’s the irony of this whole cosmic joke!

MF: Your album Kala (2015) was in many ways a reflection on overcoming adversity in your life after you were hospitalised with staph in Hawaii and forced to break a vow to not cut your hair for 12 years. How do you view that whole experience now that some time has passed?

TH: I view it as necessary for my path. And I view it as me turning into ‘the dark’. It was a step into that journey of going inside, and healing myself in ways that I didn’t even know I needed to be healed in. So, me accepting change, me accepting impermanence – there was no way around it. It was either, ‘Stay miserable, Trevor, and try to pretend that you’re in control of everything. Or surrender. Change.’

It was that deep for me. ‘Kala’ means ‘time’, so it’s about being patient and letting the hand of the Spirit work for you, and not hold onto everything so tightly.

It was the end of a chapter, and the beginning of a new one for me. Definitely.

MF: So politics aside, many believe The American Dream is being reshaped by our generation. Minimalism and mobility have replaced the traditional concept of the American dream, which has been deemed a form of ‘toxic stability’. Do you think this is a step in the right direction as far as counterbalancing capitalism’s spiritual shortcomings?

TH: It’s important for the youth to not be fooled, and understand what’s really going on. Obviously the people in power are not going to change. That’s apparent.

So it’s up to us to realize that we are sovereign beings. We are free. And despite what’s going on with people in power running our government, there’s a way we can live our day-to-day lives in a positive manner. Now whether that’s cutting down on things, or being more mobile, I don’t know. For me it’s always about the internal change. Because when that happens, everything else follows, naturally.

MF: You’ve mentioned ‘freedom’ a few times now. What is freedom to you?

TH: True freedom is freedom of mind. Freedom from the things that drag us down. Freedom from attachments. Being a sovereign being.

MF: The music video for your single “What I Know” recently dropped, and has had quite a positive response. It could easily stand alone as a solid short film. Did you have much of a role in writing the video’s storyline?

TH: Yeah I came up with the idea of the kids in the forest building this almost make-believe xylophone. And then the director added the story – there’s this leader, who is not well liked. And you almost don’t know what’s going to happen throughout this video. For a second you’re like, are they gonna, like…kill this kid!? [Laughing] Are they gonna take him out into the forest and just kill him!

“What I Know”, the song, is really about the child-like spirit, and surrendering to the not-knowing. And when you surrender to that not-knowing, you’re free. In the video, you have that leader who represents that part of us that wants to be in control, no matter what. We want to know, know, know, know… It’s just tiring. You’re never going to know everything.

So them taking the leader to that xylophone is the music, the song, it’s the thing you can’t explain. But you’re in joy… it’s that joy that makes you free. 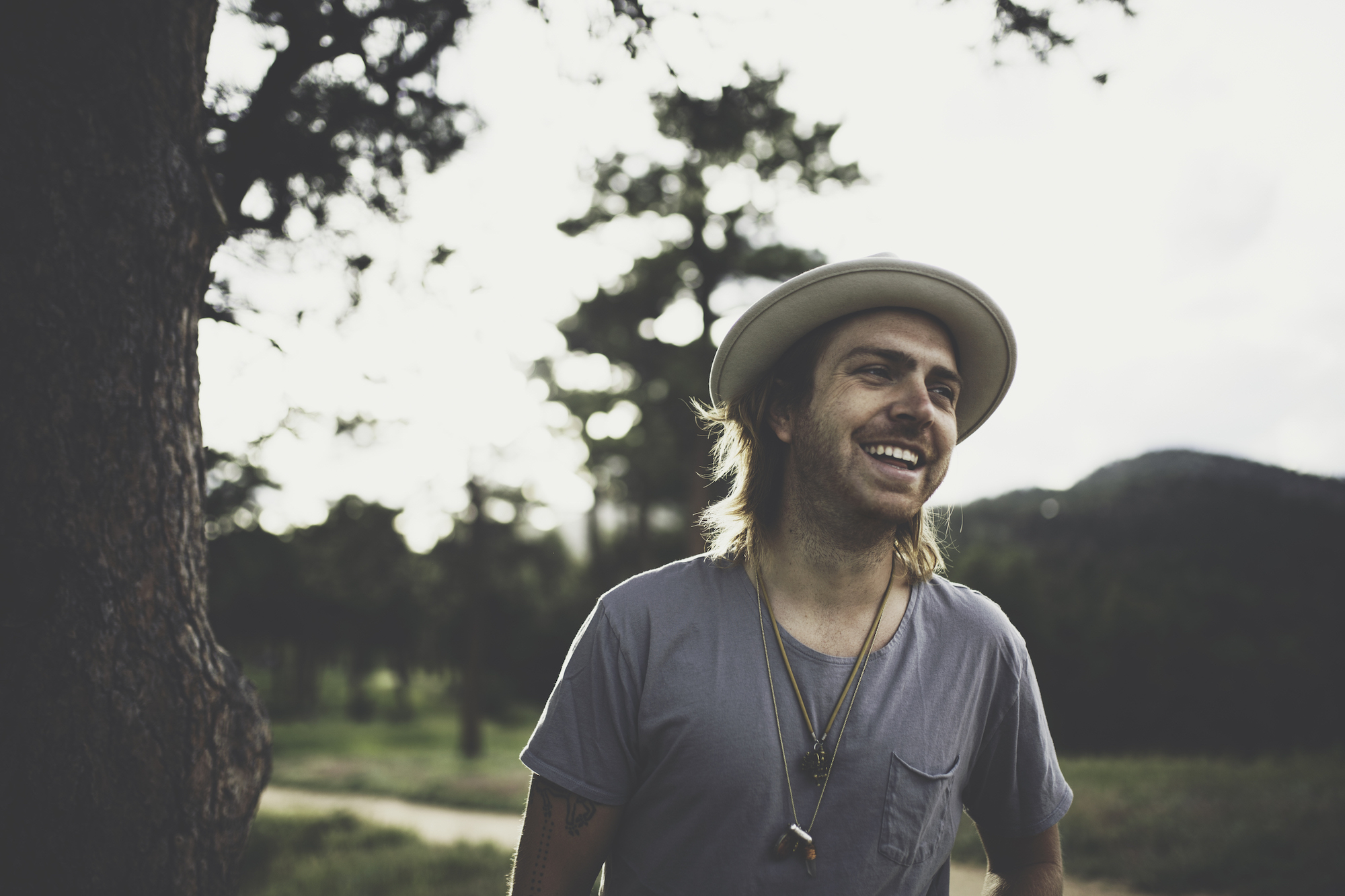