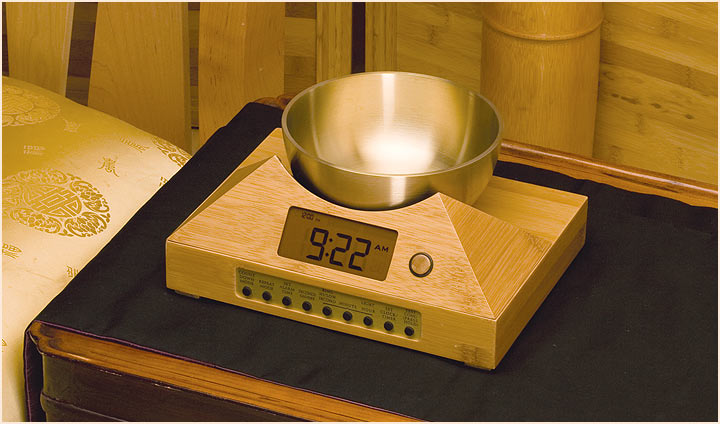 Now & Zen is Evolving the Way We Wake Up

Have you ever been in the midst of a great dream only to be jolted awake by the sound of a buzzing alarm clock? I definitely have, and it’s quite possibly one of the worst possible ways to start your day. A zen alarm clock on the other hand wakes you up gradually to the sound of peaceful Tibetan chimes. We fall asleep gradually, so it only seems natural that we should wake up gradually as well.

As Publisher of Conscious Connection, I started this magazine to inspire my readers with life trans-formative information and products. The zen alarm clock from Now & Zen is truly an amazing product which offers an excellent opportunity for life transformation by fundamentally altering the way you wake up each morning.

Did you know that being awoken abruptly from REM sleep is not only incredibly annoying, but actually detrimental to your health? Studies have shown that sudden and abrupt interruptions of REM sleep can lead to increased fatigue, irritability and stress. With this zen alarm clock from Now & Zen, you never have to worry about that again.

As the original zen alarm clock, the company Now & Zen is set on making sure you start your day off on the right foot. Now & Zen has spent over a decade perfecting their zen alarm clock to progressively wake you up in a peaceful and harmonious way. In the morning, its exquisite sounds summon your consciousness into awakening with a series of subtle gongs that provide an elegant beginning to your day.

When the alarm is triggered, the long-resonating gong strikes just once … then automatically, it strikes again in 3-1/2 minutes … then in 2 minutes … then in 1 minute … and so on following a golden ratio of strike frequency. The gong strikes gradually increase over 10 minutes, eventually striking every 5 seconds until turned off.

I received my Zen Alarm Clock (known as the Zen Timepiece) a little over a month ago and have had ample time to experiment with it. The results have been nothing short of extraordinary! In addition to adding elegance and aesthetic beauty to my room, the zen alarm clock also has completely changed the manner in which I wake up in the morning.

For instance, there is no need for a snooze button when you have a zen alarm clock that awakes you gradually to the soothing sound of Tibetan chimes. I even have greater success with dream recall as I am now allowed to peacefully conclude my dream while being gently awakened. The benefits of progressive awakening also include prolonged alpha brainwave activity and a general feeling of well-being that results when you are not startled into a waking state by an obtrusive, speaker driven alarm clock.

What’s great about this zen alarm clock is that it also functions as a meditation timer and chime for yoga poses. In addition, it can be used for dream work and affirmations. There is general agreement among dream researchers that dream memory is best preserved when the body is allowed to wake up naturally. The zen timepiece also serves as a “mindfulness bell” that can be programmed to periodically call you to stillness.

“In the larger scheme of things, our days on this planet are few and precious, so it seems fitting that we should begin each day with grace and beauty. The zen alarm clock from Now & Zen serves as a useful reminder that each day is a new and sacred opportunity to live life to its fullest.”

Find out more about Now & Zen and pick up your zen alarm clock at Now-Zen.com