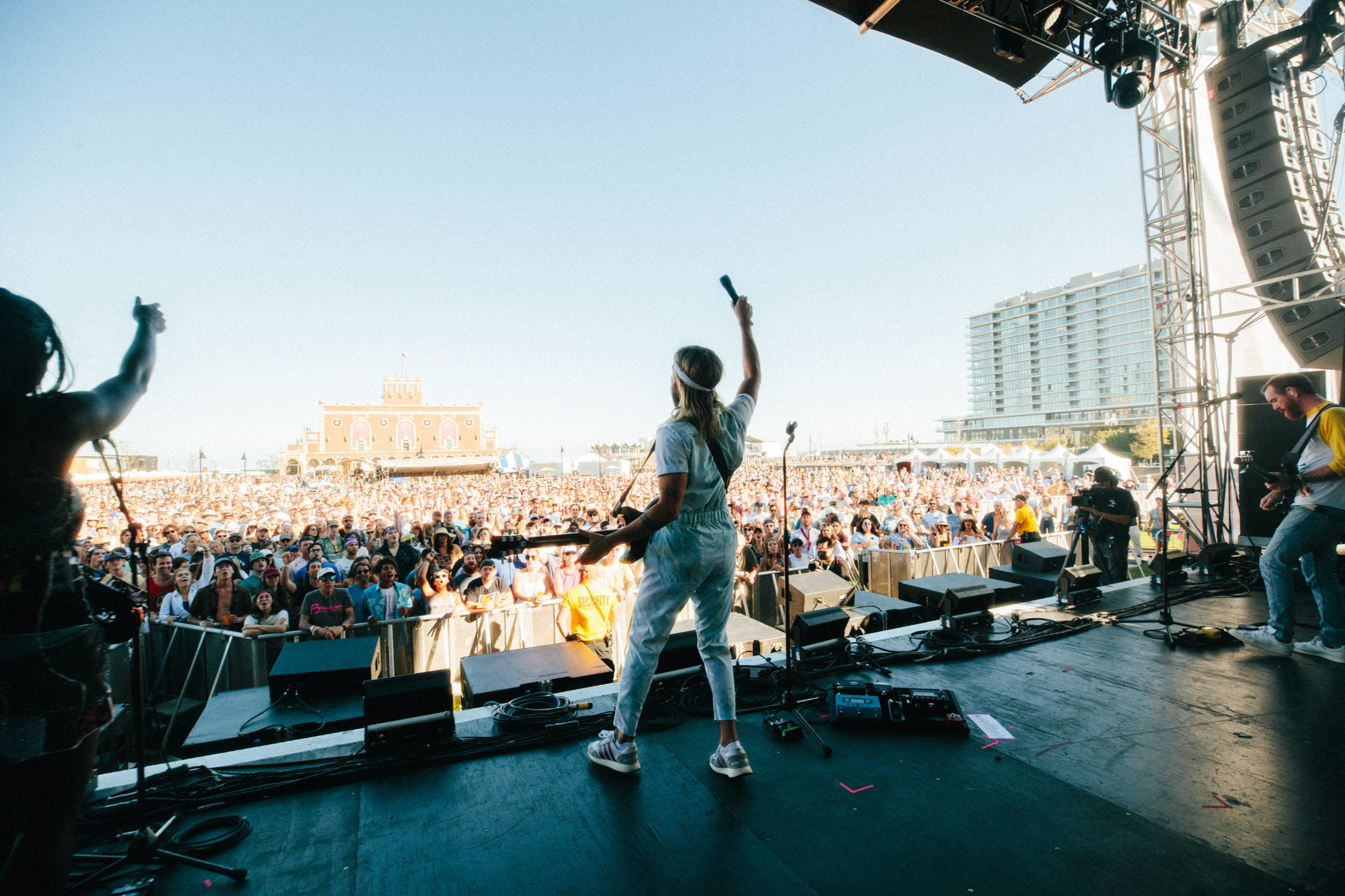 For over a decade, Nashville’s five-piece rock band Moon Taxi have been steadily climbing the bills of the biggest American music festivals, including Coachella, Firefly, and Hangout.  So for a band that made their name on the strength of an amazing live show, what’s it like to be forced offstage by a global pandemic?  I sat down with Moon Taxi’s Trevor Terndrup and Tommy Putnam at Asbury Park, NJ’s SeaHearNow, to talk about their pent-up, spring-loaded return to touring.

CC:  Before I knew any of your tunes, I first caught your set at a festival back in 2014, and I’ve been a fan ever since.  So as a band that thrives on that live scene, what’s the last year and a half been like?

Tommy:  I mean, that’s the longest I’ve been home in years, without leaving town, probably since high school.

Trevor:  I kind of enjoyed the first month, just because we’ve been relentlessly touring for ten years.  But then reality set in, (when we realized) it would be more like a year.  It’s like musicians have motion sickness in reverse.  You want to be always moving, always playing.  So we did the most we could with zooms and streams on social media.  That was fine.  But it’s that urge to move and play that just can’t be satisfied at home.

CC:  I saw a lot of artists try to do something cool over Zoom or in the virtual space, but that must be a weird adjustment.

Trevor:  We did a lot of those livestreams for good causes.  We did one for The LEE Initiative to benefit restaurant workers, because I did my time in the food industry, and they’re a great organization.  I still feel like most people should have had at least one job in the food industry.  We did another one for NIVA, the National Independent Venue Association, to help out a place we love in Nashville called The EXIT/IN, to help them keep their doors open.  So we were busy in that internet space and tried to stay engaged, but it’s not the same as playing for people live.

CC:  So what does it take to get back on the road in this weird new phase?

Trevor:  We’ve had a bunch of club dates lately, and we’re getting back into touring, and we’ve been as safe as possible.  We have our own protocol, and of course there are additional protocols, from venue to venue and from state to state.

Tommy:  And touring is hard right now.  There’s a shortage of buses.  If you get a bus, it’s hard to get a driver.  And if you get a driver, you just hope that they’re vaccinated.  This is the third bus we’ve had.

CC:  Can you describe the experience of that first show back, after having been forced offstage for a while?

Trevor:  When we finally got back out there, it was like spring-loaded.  It’s a lot of pent-up energy.  I’ve had to remind myself to pace myself, especially if we’re doing five shows in a row.

CC:  And there are so many fans with that same pent-up energy.  I imagine that you look out into the crowd and see the faces who are just elated to be back here with you.

Trevor:  Well, there was an era when we sold podded tickets, when you buy a ticket to a pod that’s a self-contained unit.  But those (podded shows) didn’t really have the same energy of everybody singing along, shoulder to shoulder, putting their hands in the air.  There’s something about proximity.

Tommy:   Live music should make you wanna throw your arm around a stranger and say, I love this song too!

Trevor:  I know this doesn’t sound Covid safe, but when you’re breathing the same air as somebody, there’s something shared there that you can’t get over the virtual space at all.

CC:  I think it’s why people come to festivals.  A lot of big fests livestream their show now, but people still want to come outside and get sweaty.  Of course, it helps to be at a big outdoor event like Sea Hear Now, where everything is out in the fresh air.

Trevor:  And what a beautiful day for it.  We’re so excited to be here, and excited to see our boys Dirty Heads.

Tommy:  We played a festival in Buffalo last night and got to hang out with our friends in The Revivalists, and those are two bands that we’ve toured with, and I realized this is what I missed the most.

Tommy:  The other bands that we’re friends with, watching their sets, and seeing them watch our set…  it’s just so good to be back, and to see your friends doing what they do.

CC:  So now that live music is back, what are you most excited for?

Trevor:  We’re already writing new tunes, and we’re going to put it out as quickly as possible, in the way that we’re used to, which is to go out and play it live for people.

Tommy:  I’m most excited for the end of the pandemic.  (laughs)  We’ll see if it actually happens.

l suspect that Trevor’s analogy about rusty engines might have been false modesty, because Moon Taxi’s hourlong set was a rollicking, crowd-pleasing highlight of Sea Hear Now 2021.  Catch them on tour through October and November, and check out their fantastic new album Silver Dream.