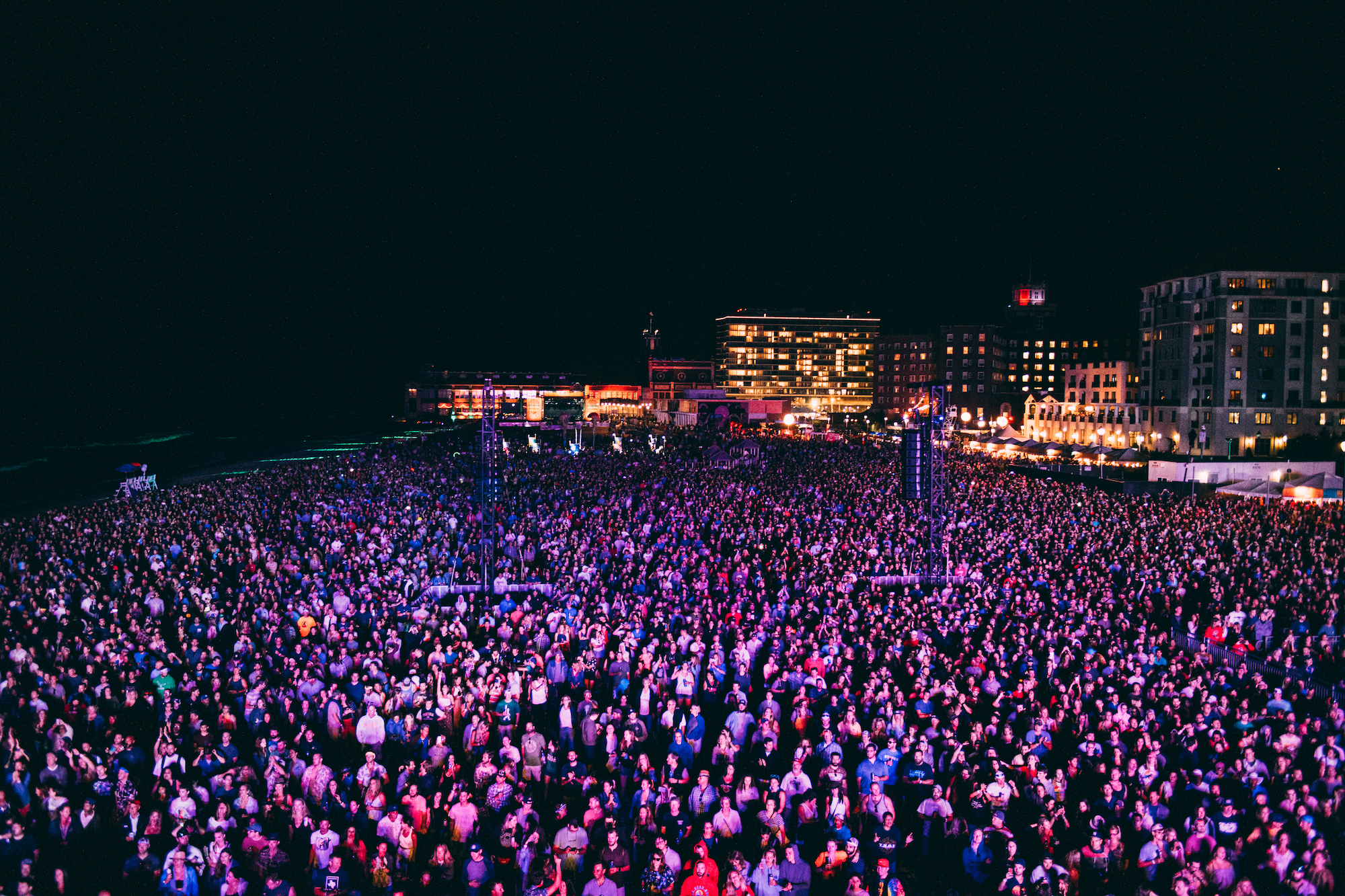 Sea.Hear.Now Is The Festival That Could Only Happen In Asbury Park

Asbury Park, NJ: It’s a city rich with music history. On any given night, this is the kind of town where any local watering hole, from The Saint to The Wonder Bar to The Stone Pony, might be hosting the next great indie songwriter. Or some legendary underground punk band. Or a surprise late-night set by Bruce Springsteen.

And for the second year in a row, it all climaxes in a beautiful late September weekend called Sea.Hear.Now: Two days, three stages, dozens of artists and the best local food vendors. Plus it’s the only fest on the East Coast that pairs live music with pro surfing. You can literally watch Quincy Davis shred the gnar while hearing Joan Jett shred a guitar, all on the very same beach.

Full disclosure, you won’t find any lip-syncing pop stars or button-pushing DJs here. And that’s extremely rare in an era when all of the big festivals specialize in overlapping celebrity headliners. (Ariana freaking Grande headlined Coachella and Lollapalooza this year.) So rest assured, here’s one lineup where genuine songwriting chops are still a prerequisite. And with advance GA wristbands starting around $100, Sea.Hear.Now is still a fraction of the standard festival price.

Saturday kicks off with festival founder Danny Clinch welcoming Blind Melon to the Surf Stage, along with Nico Hoon, daughter of the band’s late frontman Shannon Hoon. Blind Melon have always been tragically under-appreciated, even during their ’90s heyday, and nobody has done more than Clinch to prompt the critical reevaluation that the band deserves. For anybody who hasn’t seen Clinch’s fantastic documentary All I Can Say, Blind Melon’s 30-minute set (they’re now fronted by Travis Warren) is a perfect showcase for an incredible body of work.

Other Saturday highlights include two iconic punk acts: Joan Jett celebrates her 61st birthday with a lively cover-heavy set, and Bad Religion takes the Sand Stage just after dark, blasting through 19 songs in under an hour. Despite the ever-persistent rumors, Bruce Springsteen sits this year out. But there’s plenty of love for The Boss throughout the day, with The Struts covering Dancing in the Dark, The Lumineers covering Thunder Road, and Joan Jett ripping through Light of Day.

Sunday kicks off with a few fantastic local artists, including Brick + Mortar of Toms River, Lowlight of Red Bank, and Work in Progress of Little Egg Harbor. All three bands bring out sizeable crowds, and that’s no easy feat, since most festival goers are usually pre-gaming or looking for parking when the first acts hit the stage. But props to Sea.Hear.Now for showcasing some great Jersey talent for the second year in a row- and if anybody’s checking the suggestion box, it would be nice to see some of those local acts a little higher on the bill next year.

Sunday night brings back-to-back sets from Dropkick Murphys and Dave Matthews Band, drawing both bands’ avid fanbases, and all of the casual fans in between. For anybody who thinks Asbury Park might be getting a little too safe and mainstream… well, rest assured that the Dropkicks can still whip the beach into a mosh pit, and Dave Matthews can still turn the night sky into a nice thick smoky cloud.

Speaking of clouds: For the second year in a row, the weatherman is the real star of the show. Both Saturday and Sunday are warm and sunny all day, mild and cool all night. Saturday even brings a nice little swell for the pro surfers. In the world of outdoor festivals, the forecast is always the one big question mark, especially in late summer, and especially at the Jersey Shore, but Sea.Hear.Now is now two-for-two in terms of perfect weather.

Very few music festivals have been this instantly successful. Estimated attendance tops 37,000 this year- a big jump from 21,000 last year, which was already deemed a great start. And from the beginning, the festival producers have been tremendously active in sustainability, recycling over 11 tons and saving over 35,000 plastic bottles in 2018 alone. Sure, the lines for the food trucks are still way too long- but a few growing pains aside, Sea.Hear.Now, like Asbury Park itself, has become an essential musical destination.

So with apologies to all of the Ariana Grande fans out there, let’s hope that some of the giant brand-name festivals take a good hard look at Sea.Hear.Now and all of its early success. Here’s proof that the bill doesn’t need to look like a teenager’s Spotify playlist to sell wristbands. (And without the high-priced pop stars on the event payroll, those wristbands don’t need to cost a small fortune.) If you’re still not convinced, plan a trip to Asbury Park for September 19 and 20 of next year, and trust me: Seeing (or is that sea-ing?) is believing.