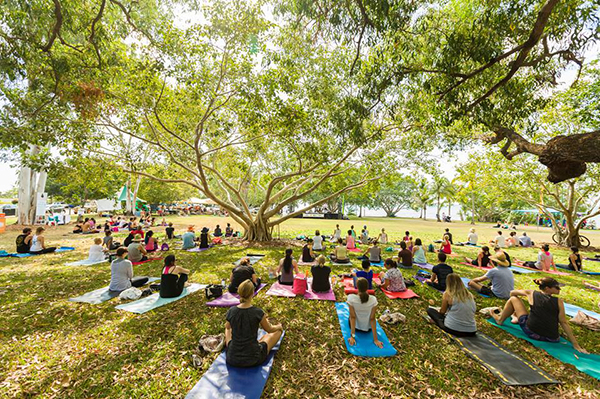 Imagine this. A million arms are reaching up to the sky. Soft, ambient music lilting in the air. Hundreds of colorful yoga mats lying on the white sand. Perhaps tinkling bells break the silence. These were just a few of the images from June 21, 2016, during the United Nation’s second annual International Day of Yoga.

A (Brief) History of The International Day of Yoga

The International Day of Yoga was overwhelming approved in December of 2014 by the 69th United Nations General Assembly.The Day of Yoga is the brainchild of India’s Prime Minister, Narendra Modi. Mr. Modi spoke passionately about the benefits of yoga stating, in part –

“(Yoga)…is an invaluable gift from (India’s) ancient tradition. Yoga embodies unity of mind and body, thought and action…Yoga is not just about exercise; it is a way to discover the sense of oneness with yourself, the world and the nature” (see more of his speech here).

The UN recognizes the daily benefits of yoga as one way to better health and a less sedentary lifestyle – a problem quickly becoming a worldwide issue.

The first International Day of Yoga was held June 21, 2015, a date purposefully chosen for several reasons – 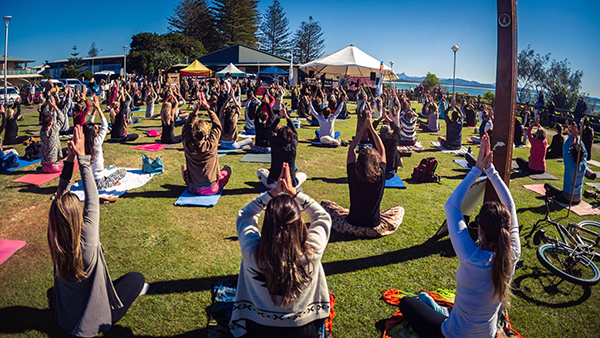 Millions participated enthusiastically in the first International Day of Yoga, in 2015, and this article will explore the day’s activities for the second annual festival in Australia – specifically the cities of Brisbane, Gold Coast, Byron Bay, Adelaide, Sydney, and Darwin.

Yoga is a new concept in the “land down under”, which is not surprising considering the remote location of the country. Some speculate that the aboriginal societies might have had their own forms of yoga but that has not been proven.

What is known are the historical roots of yoga in Australia, beginning with the opening of the Sydney Yoga Center in 1950, the Gita School of Yoga in 1954, and Roma Blair’s Yoga Club in 1956. Sydney lives up to its reputation as “yoga central” for the small continent. Small roots have turned into a massive tree of yoga enthusiasts spreading its limbs to every major city in Australia – Brisbane, Gold Coast, Byron Bay, Adelaide, Sydney, and Darwin are now major yoga hot spots of the continent.

The next major wave of Australian yogic growth occurred in the 1980’s when several important yoga masters traveled to the country to teach and influence the fledgling movement, and it was during this time that yoga’s legitimacy went through a major growth spurt. By the 1990’s, Australians incorporated more “Westernized” stylings, practices such as Hatha Yoga with its offshoots such as Bikram (“hot” yoga), Iyengar (stressing alignment), and kundalini (a theoretical “coiled up” energy representing man’s potential).

Today, yoga is a part of everyday life for many Aussies and this article will move on to look at Australia’s role in the 2016 International Day of Yoga.

As mentioned in the previous section, yoga’s growth in Australia has been exponential, becoming increasingly Westernized with each passing year. Many event attendees hoped to learn more about the latest happenings in the yoga community and improve, network and practice with like-minded souls.

The major cities of Brisbane, Gold Coast, Byron Bay, Adelaide, Sydney, and Darwin were the primary participants in the event. Hosted by The Australian School of Meditation and Yoga (ASMY), the free, community-wide events were open to all ages and levels of experience, from beginner to expert.

Sydney, the undeniable epicenter of the Australian yoga movement, held many sessions on the fabulously beautiful white sands of Bondi Beach and at Parramatta, a multicultural hub in the western suburbs. Often considered to be a city-within-a-city, Parramatta is an area of diversity and home to Australia’s growing LGBT community. The region was founded by British settlers in the late 1700’s and is the largest area of this type of inland settlement. Two of the most popular sessions on Bondi Beach was yoga for surfers and the Grand Surya Namaskar, at Parramatta, a series of 12 asanas (sun salutations), followed by additional poses, then a deep, resting yoga nidra (corpse pose). 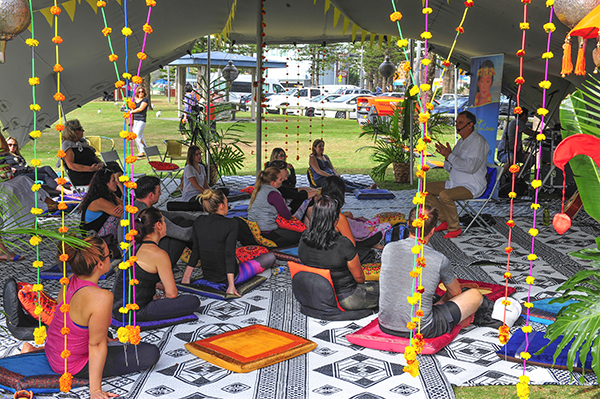 The Australian coastline was a mosaic of participating cities, color, harmony, and peace for at least one entire day, June 21, 2016 – The International Day of Yoga. Beautiful, relaxed faces prevailed, the beaches of Sydney, Burleigh, and Byron filled with true posers, and cities such as Brisbane filled its convention hall, luckily, as it rained the entire day of the event in that area. Adelaide held their International Day of Yoga events at The Sanctuary-Adelaide Zoo. All hosted tremendous workshops and hosted informative speakers.

The Australian International Day of Yoga was a memorable experience and rousing success where everyone on the continent, and the planet, came together on the same day (almost) for the largest shared event in the world. With luck, perhaps International Yoga Day, 2017, will find the world a little better off and much more at peace.