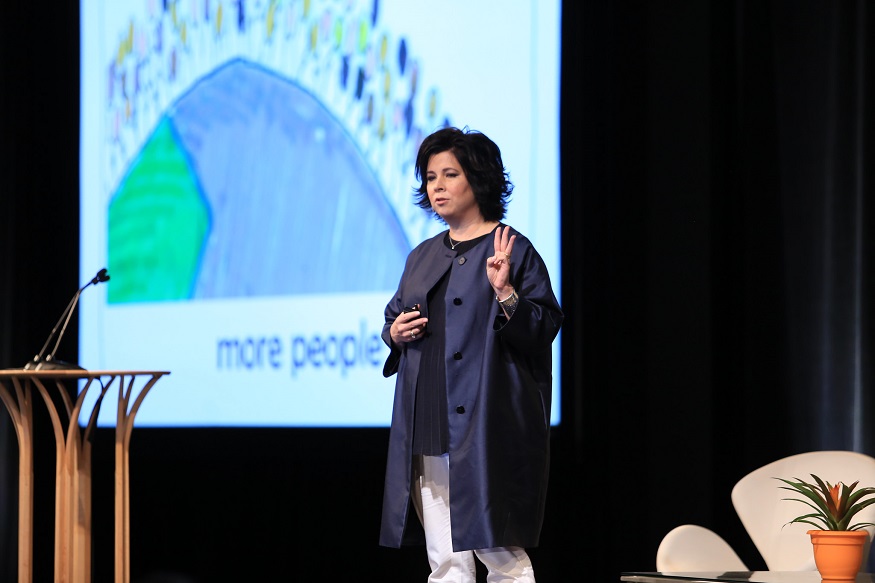 20 years ago, when Sheryl Connelly landed a job answering phones at Ford’s 800 call center, she thought that it would be a short-term job. Little did she know that she would become a Futurist at this multi-national corporation, helping to steer the company along the paths of social, technological, economic, environmental and political change.

Once Connelly began working on Ford’s trends and futuring team, she felt like she was at home.  Said Connelly, “Environmental issues can be very compelling, and once that bell has been rung, you can’t un-hear it.”

One of the first things Connelly will tell you with regard to sustainability in the automotive industry is that she is frustrated that the topic is often limited to a discussion of mpg. To Connelly, this narrow view is a disservice to sustainability. “I think the true focus of sustainability should be the well-being of the community which you serve,” she shared.

And that’s where Connelly gets excited, because Ford has a story that’s unique to any automaker. Founder Henry Ford provided for the well-being of people in his community. He created a school for his employees, he create a hospital, he instituted a living wage; he fundamentally changed the quality of living for generations of families.

Bill Ford, the great grandson of Henry, is currently Chairman of the Board. When he gave a speech in 2011, he said that it never occurred to him when he was young that his two great passions, the environment and cars, would ever come into conflict. But once he realized that they were, he became set on trying to resolve that conflict. Connelly believes that those principles will guide Ford’s direction in the future.

Even with Connelly’s broader focus, the conversation regarding mpg must be had. As a futurist, Connelly says that no one can predict the future, and this is why Ford pursues a variety of paths in powertrain development. Ford continues to invest heavily in traditional gas engines, trying to improve what they have: for instance, EcoBoost allows many of their cars with V6 engines to perform like V8s but with greater fuel economy. At the same time, Ford is investing in high-tech diesels, hybrids, battery-electric, and pure electric engines, and they are also exploring in the arenas of hydrogen and biofuels.

Ford is developing these multiple paths because they don’t believe there is ever going to be one single solution that is best for every part of the world, and they want to be able to meet the needs of each market as effectively as possible. This makes Ford’s offerings unique among its competitors. With other brands, if you want an electric or a hybrid vehicle, you have one nameplate. However with Ford, a consumer can first decide whether he or she needs a car, truck or utility vehicle, and then the customer can pair the power-train of his or her choice with that vehicle. With this strategy, Ford believes it is better positioned to meet the needs of its customers.

Connelly noted that millennials are starting to buy cars in greater numbers than ever expected, and their top brand is Ford. At Ford, they believe that this has a lot to do with democratizing the technology and making it affordable.

In addition to powertrain improvements, technological advancements that improve vehicle safety are another way in which car manufacturers improve the lives of their customers.  Take, for instance, the elderly: if they are driving beyond their capabilities, it presents risk to everyone on the road; however, being able to own and operate a car provides independence and even a sense of dignity to many elderly people.  It’s exciting to Ford that recent advances in technology, including adaptive cruise control, reverse sensing systems, rear-mounted panoramic cameras, blind spot alerts, collision warnings, and lane departure sensors are helping the elderly to have the freedom, independence and autonomy of safely owning and operating their own car longer and later in life.

Of course one of the hottest topics in innovation is the autonomous car. While the technology for autonomous vehicles exists, the full benefit of autonomous driving cannot be fully realized until there is a universe of autonomous vehicles on the road, and this is a much larger-scale goal than most people realize.  Not only would this goal require the turnover of the entire fleet of cars on the road, it would also require the collaboration of stakeholders such as urban planners, the government and regulatory agencies, and the insurance industry.

While Connelly is hopeful about the future of autonomous-driving vehicles, she’s not sure they will ever be universally adopted. She predicts that autonomous driving will happen in pockets of the world where it will make sense. For instance, she can see it happening in congested cities like Beijing, where the political system is nimble enough to effect change more quickly. Conversely, since Americans love the notions of the open highway, the wind in their hair, and putting the pedal to the medal, Connelly believes autonomous driving is less likely to be adopted in the States.

The average commute in Beijing is five hours per day. During the 2012 Summer Olympics in Beijing, a traffic jam occurred which lasted 11 days. Given the enormous population of China one might be tempted to think that this could never be a global issue, but the US has seen 2 jams that have lasted over 24 hours, one of which resulted in loss of life.

America leads the world in car sharing with one million members. In the business model used by Zipcar, members pay a small monthly or annual fee and then pay an hourly fee for short-term car usage. Real-time ridesharing facilitated by companies such as Uber is promoting a way to better utilize the empty seats in most passenger cars, thereby lowering fuel usage and transport costs. Ridesharing can serve areas not covered by a public transit system and act as a transit feeder service. Years ago, upgrading one’s car every two years was a status symbol. Today, the average vehicle on the road is 10-11 years old.

All of these alternatives to car ownership models of the past may present a challenge to car manufacturers whose dealership sales are the bread and butter of their businesses. Unlike the buggy-whip manufacturers of yesteryear, Ford is well aware of these potential changes and has re-identified themselves as a mobility company rather than a car manufacturer.

In line with this new identity, Bill Ford met one of the founders of Zipcar and told the founder that he really liked the Zipcar business model. Although the Zipcar model ultimately puts fewer vehicles on the road, Ford acknowledged that new car-usage models like Zipcar may be a future necessity. Ultimately, if the population continues to grow, adding more cars to the road isn’t going to serve mobility needs in the end, because the world will be stuck in global gridlock.  So Ford is now looking to be part of an ecosystem of mobility solutions, and that could involve mass transit, ride sharing, co-ops, or different forms of ownership.  Ford wants to be part of the solution, and as part of this vision, Ford has developed partnerships with Zipcar.

Mobility: A Function of Sustainability

When the definition of sustainability is broadened to encompass the well-being of the community you serve, it becomes apparent that mobility is a part of the sustainability effort. While thinking of mobility as a human right may seem a bit nebulous, when you think about that 11-day traffic jam in Beijing or people getting perilously stranded in winter storms, it becomes clear that mobility is a critical issue.

When Henry Ford paired car manufacturing with the assembly line, it not only enabled mass production, but also mass consumption. So, in that same spirit, Connelly posits, how do we bring mobility to all?  How do we make it accessible in new ways that are sustainable, good for the planet? Said Connelly, “At Ford, we talk about ‘people product planet’ – how do we do things that are good for people, good for our products, and good for the planet as a whole. This is one of Ford’s guiding principles.”

Connelly continued, “We are driven by a desire to do good; that is the light that guides what we’re doing.”  As evidence, Connelly told us about two amazing programs that Ford is working on for the well-being of India:

SUMURR: One example of a pilot mobility program undertaken by Ford is the company’s Sustainable Urban Mobility with Uncompromised Rural Reach (SUMURR) program in India. This program made use of a Ford Endeavour that was designed to handle difficult terrain and traverse areas previously unreachable by four-wheeled vehicles. Medical professionals traveled in the Endeavour to reach their patients and to transport those patients to clinics. The health care teams could also use laptops and cell phones to connect – via a wireless connection – to doctors and medical records. In all, 41 pregnant women delivered healthy babies thanks in large part to the Ford pilot project.

The Golden Hour:  In the medical community, it is generally understood that a trauma victim’s odds of survival are greatly increased if they reach definitive care within 60 minutes of being injured. These 60 minutes are referred to as the Golden Hour. Ford is challenging developers to help improve outcomes for individuals in Delhi requiring trauma care as a consequence of accidents, to decrease the time to get to treatment or to get to a trauma center, and/or to increase the availability of information related to treatment needs within those first 60 minutes.

Clearly, redefining the company as a mobility business has led Ford to engage with its community in ways that aren’t expected. Said Connelly, “Consumers think all we think about is the 4 wheels or the chassis, but we’re definitely becoming something bigger and better.  I’m proud of these things.”