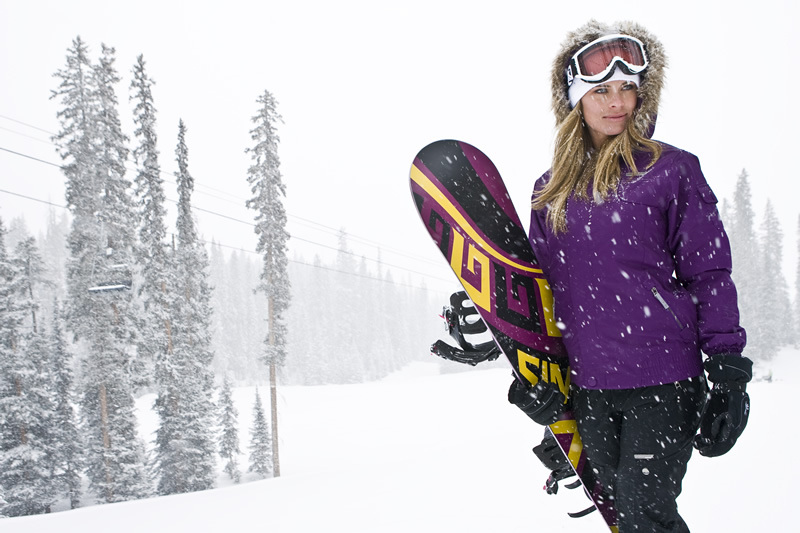 Raised in Adelaide, Australia, and now based in Aspen, Colorado, Ramona Bruland is a winter sports enthusiast, television host and lifestyle travel presenter. Conscious Connection Founder Anthony Chiaravallo sat down recently with Ramona to talk snow, the great outdoors, and living life to the full.

Anthony Chiaravallo: Ramona, you’ve designed the ultimate lifestyle many of our readers aspire to. What initially motivated you to pursue this adventure lifestyle full time?

Ramona Bruland: I guess it goes way back to my Mum, who was a huge outdoors enthusiast and kind of dragged us around the wilderness as children! It was always a dream, as soon as I finished High School, to go travel the world – which a lot of Australians do. I did that for over a year, and when I went back to University I just couldn’t get into the Business Studies. I just felt, “I want to go play in the wilderness!” That’s when I decided. I had spent a few months at the Vail Ski Resort when I was overseas, so went back to playing in the mountains in the Australian snowfields for a season. That next year I won a scholarship to study Outdoor Education, so I basically had a full ride scholarship to go play in the wilderness!

Anthony Chiaravallo: Sounds like the outdoor lifestyle was built into your DNA. Tell me a little bit more about how you got started – you moved to Colorado, you had this full scholarship in Outdoor Education, and I read that you decided to become a ski bum for a season at nineteen! But how did you make that transition; from being a ski bum, to turning this into a full time career?

Ramona Bruland: Well it’s very easy to make ski bumming a full time occupation! A lot of people say they’re going to go spend a season in the mountains and twenty-five years later, they’re still here! I started in hospitality. I was bar tending at night-time and snowboarding during the day, but the transition that made it into a career for me, and kept me being able to live the dream, was that I fell into television. I started as a snow reporter while I was in Australia. The Australian company that hired me to do that also made a travel lifestyle TV show called SNOWSHOW, and it aired nationally across Australia and on Sky TV in Europe. They would fly me around the world to ski destinations, and we’d do lifestyle stories on the best places to ski. It didn’t pay very well, but the perks were amazing!

It wasn’t until 2006, when I was 26, that I accepted full time television work in Colorado for the first time with Plum TV, which was a lifestyle resort network. I ended up landing a full time job with their morning show, and it went from there. I’ve been full-time in the States ever since!

Anthony Chiaravallo: I want to ask you – before you got started in all this, what were your plans? I know this happened organically, but is this something you ever saw yourself doing when you were younger?

Ramona Bruland: Well, all through my childhood, there were two primetime TV shows on in Australia; one called Great Outdoors, and another called Getaway. There were some hosts on those shows that I absolutely adored, like Catriona Rowntree, who I thought had the best job in the world. She was a travel lifestyle TV host, and I imagined that that would be a dream job. But I never studied journalism. It was a dream, but never a plan! I never really had a plan, I just knew what made me happy, and I knew what I was passionate about, and I just jumped in uninhibited.

Anthony Chiaravallo: That’s a really good point, and I think that’s something that will resonate with our readers too. You know what makes you happy, and you know what you’re good at, and you pursue that and everything else just seems to fall into place. I want to learn a little bit more about your philosophy on life, about what makes you come alive, and about this philosophy that you have of doing something that scares you every day. Tell me how that has worked for your benefit.

Ramona Bruland: Well you know, fear makes you feel alive, and fear is relative. For some people, stepping out their door into a busy public street is terrifying, and for other people base jumping is terrifying. Embrace fear, push your boundaries and think outside the box. –>It’s all relative, and I think it’s important to push your boundaries. If you live in a bubble of comfort, you’re never going to grow, and you’re never going to achieve anything, so whether it’s public speaking, or trying new food you don’t like, or getting your heart rate up with paragliding in a totally safe environment in tandem with an instructor who’s done it a million times – it’s not going to terrify you – but it’s such a rush, and just a memory you’ll never forget. So why not scare yourself every day with something different or new, or something that you’ve done a lot that just gives you that thrill, and makes you feel alive?

Anthony Chiaravallo: I think you hit an important point there – getting people to step outside of their comfort zone a little bit – I think that’s really where the growth is. I think that’s really good advice. You’re pretty involved in this lifestyle, and you do quite a few outdoor sports yourself. You’re a rock climber, and a snowboarder. What else do you do, and what are your favorite outdoor activities?

Ramona Bruland: Well, the list is quite long! I have a lot of toys, but in winter I ski or snowboard. I also have touring equipment, and I love to ski tour. We have snowmobiles, so I love to go snowmobiling. And hiking is beautiful, just to get out in the wilderness, which is very easy to do when you live in Aspen. You know it’s just a step out of your back door, it’s phenomenal.

In winter I also do Yoga and Pilates. I keep myself limber and stretched, because of all the outdoor stuff you need to balance out your body. In summer I do a lot of biking, whether it’s road biking or mountain biking, and I love to dirt bike. I grew up surfing, and I ended up boogie-boarding as a teenager because then I was able to catch waves! But that’s why I like wake surfing so much, because you can actually get up the first time and ride for ten minutes with a cocktail in your hand – it’s awesome! 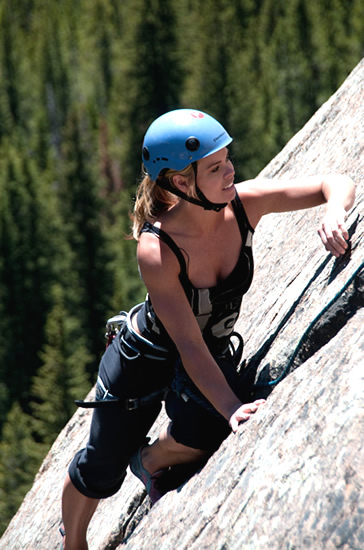 Anthony Chiaravallo: How often have you been rock climbing? Is that something that you do regularly, or once in a while?

Ramona Bruland: Well, I did it a bunch as a teenager, and when I was in college I used to be a high ropes instructor. I had lots of friends that climbed, and would take groups climbing. I haven’t done it as much in recent years, but actually just this year I did climb… you’re going to laugh! I have a small but recurring role in a daytime soap opera called The Bold and the Beautiful. They were out here in Aspen this fall, and they were filming a scene that involved a big climbing expedition featuring a tragic fall – well, it wasn’t too tragic, no-one died! So yes, I was climbing with a film crew and cast from The Bold and the Beautiful this fall.

Anthony Chiaravallo: My next question is that in 2011, you took this plunge into freelancing. Tell me about some of the challenges of becoming a freelancer.

Ramona Bruland: Well, being a freelancer is my choice. I want to live in Aspen – I don’t want to move to a city and take a full-time network job. If I move to a city then I can’t play in the mountains, I can’t do what I love, and that defies everything I stand for. So yes, I’ve turned down those full-time network jobs. It’s hard sometimes, when work is few and far between, and then other times it’s fabulous and I’m busy and traveling a lot. At this stage though, I don’t want to do anything other than live in Aspen, and work here in television – which I love – as a freelancer.

Anthony Chiaravallo: I want to talk about some of the volunteer and philanthropic work that you do. I know you’re in a yearly show that you helped co-found for AIDS awareness; tell me a little bit more about that.

Ramona Bruland: I co-produced the Aspen AIDS benefit, and I helped bring it to Aspen three years ago now; this’ll be the third annual here in Aspen. But I didn’t found it, because it’s been running for twenty-one years in Telluride Colorado as the Telluride AIDS Benefit. There it’s had time to grow, and it’s a huge, spectacular gala event that everyone goes to. It’s the place to be, and in the last twenty-one years our benefit fashion shows have raised over $1.8 million for AIDS research, education and NGOs.

Anthony Chiaravallo: That’s phenomenal. I’ll have to check it out if I can make it up this next season.

Ramona Bruland: Yeah! It’s the last Saturday in March – the 29th – so maybe you should take a vacation to Aspen, do some skiing, and come check out our benefit!

Anthony Chiaravallo: I’d love that! My last question for you is what is your best piece of advice, for our readers, who are looking to live a similar lifestyle to you, doing what they love, and to be able to make both a living and a difference doing that.

Ramona Bruland: One thing I always say – and it was kind of Plum TV’s mantra as well – is think outside the box! Don’t do what’s expected of you; do what makes you happy, and what you’re passionate about, and what you’re good at. Kids go to school, they go to college, they get the degree, they get married, they buy the house, they have the mortgage, they get the white picket fence, they have the kids. Before they know it, they’ve been working their whole lives and they haven’t done anything! Well, I can’t say they haven’t done anything, but!

Ramona Bruland: Yeah, they haven’t lived. I guess the sense of living is different to each person, but if you feel like you’re expected to do something, there’s the pressure of history, or society – no! Just go for it! Revolt! Throw caution to the wind – and be sensible, and safe – but have fun! Think outside the box, and just do what makes you happy.

Anthony Chiaravallo: I think that’s great advice, and I think it’s something that our readers will really enjoy to hear. Thanks so much for taking the time to speak with us today!