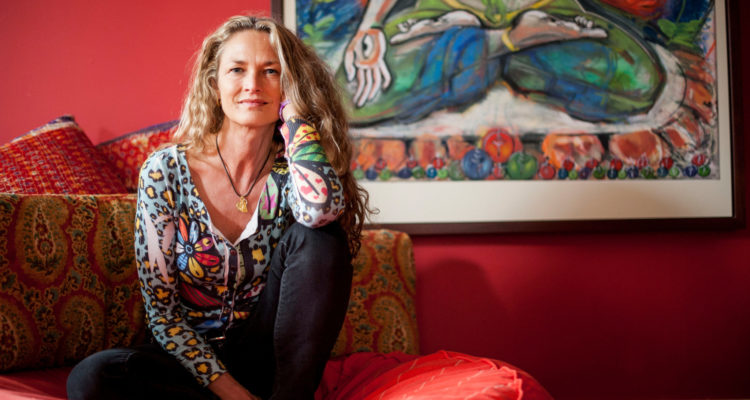 The Power of Yoga to Change Lives

Colleen Saidman knows a few things about yoga. She began practicing in 1987, while using it as a compliment to her extreme athletic endeavors such as running, boxing and basketball.

After she suffered a back injury  in 1994 that led to surgery, yoga has been her entire regimen to which she is fully devoted. Her belief? That yoga continues to heal her on many levels. In 1998 she graduated from Jivamukti’s Teaching Training program and has been teaching it ever since.

With her husband, Rodney Yee, they have developed a variety of yoga DVDs and have helped create and now co-direct Urban Zen’s Integrative Yoga Therapist Program, a world-wide initiative of Donna Karan. Today, Saidman owns and directs the Yoga Shanti yoga studio in the Hamptons and conducts teacher trainings and retreats worldwide.

In addition to being featured in Vanity Fair, The New York Times, and O, she’s also held the cover of several yoga magazines. Conscious Connection caught up with Colleen to talk about the yoga lifestyle and how you can even learn to use yoga for weight loss.

Conscious Connection: What inspired you to become a yoga teacher?

Colleen Saidman: I wasn’t really inspired to be a teacher. I took teacher training in order to deepen my practice. I told my teachers, Sharon Gannon and David Life, in the middle of the program, that I had no interest in teaching for many reasons. 1, I’m shy; 2, I have epilepsy, and what if I had a seizure while teaching? 3, I’m tone deaf, and they said we had to lead chants; 4, I’m slightly dyslexic, and I can’t mirror a class. The list went on. They listened patiently and I left their office and got a call 10 minutes later saying that I was going to teach Sharon’s prime time class that evening. They said it was sold out and Sharon would be taking the class. They threw me off the cliff and that’s what it took.

Conscious Connection: How did you come to work with Gaiam?

Colleen Saidman: I started working for Gaiam as a model in their catalogues and I then became a yoga demonstrator in Rodney’s videos. They then asked Rodney and me to co-create a 12-week online yoga school, which we did: the Gaiam Yoga Studio. I became the other talent in Rodney’s videos—for the AM/PM video, for instance, I did the PM half. And I also did half of the best-selling Yoga for Beginners. And then last year they asked me to do a standalone DVD. I was so excited and am so proud of Yoga for Weight Loss. In June, I’m filming another standalone.

Conscious Connection: How does Gaiam’s mission complement your own work?

Colleen Saidman: Gaiam keeps it real and has so much integrity. They are sincerely looking for solutions to the problems that keep us unhealthy in mind, body, and spirit, and my philosophy is exactly that. It’s a perfect synergy. And the people that work there are walking the talk, which is important to me.

Conscious Connection: Why is it important to incorporate yoga into our lives?

Colleen Saidman: I can’t imagine how anyone gets through life without yoga. I know that sounds dramatic, but the tools that yoga gives us to deal with everything life offers is astounding. Yoga teaches us intimacy of the body; our bodies have so much innate wisdom, but we’re just too busy and loud to tune into it. Yoga can bring you to your ideal weight. Yoga teaches you mindfulness, which allows you to be in the present moment—so that you don’t die never having lived. It teaches you how to stop, take a breath, and really see, hear, feel, taste, and have gratitude for this moment. (How many times have you really been in the moment?) It teaches you how to keep your equanimity through the tough stuff, how to stay grounded when the wind is blowing you off course. It teaches you to feel deeply and not run away.

Through asana, pranayama, meditation, and study of the ancient scriptures, you realize that you’re not alone. And asana keeps the body functioning optimally. It increases flexibility and strength. It nourishes the organs. It’s a big de-stressor. It balances the hormones, increases digestion, and increases your quality of sleep. It also improves your relationships. It teaches you to respond rather than react. And, come on, the yoga body is beautiful.

Conscious Connection: How can you use yoga weight loss?

Colleen Saidman: Yoga is a powerful tool for weight loss on every level. Obviously, yoga is exercise, and it burns calories. Then, the more muscles you develop from doing yoga, the more calories you burn. More than that, yoga decreases stress, and stress is a lot of why we overeat. On top of that, a lot of what we eat is not optimal for nourishment for the body, and when you tune into your body with yoga, you realize what is needed and what is not.

Yoga wrings out the stress of the body and gives us a better night’s sleep. And when we don’t sleep well, we gain weight. In the Yoga for Weight Loss DVD, I focused on moving the arms for more cardio and calorie burning. I also focused on poses that address the midsection—the abs, lats, and back—in a very holistic way. I also focused on some forward bending, as forward bends are relaxing, de-stressing, and give you better sleep. It’s a very holistic approach to weight loss, and it’s very effective. People say that the video is strenuous and relaxing at the same time.

Conscious Connection: What role does your mindset play in losing weight?

Colleen Saidman: Yoga is actually a training of the mind and the mind plays a huge role in weight loss. When the mind listens to the body, the result is staggering. The body doesn’t really want that Twinkie or Slurpie. Rarely does one leave a yoga class and crave a cupcake. But the line at the juice joint is full of yogis. It does become a lifestyle.

Conscious Connection: What do you see in store for the future of yoga / Gaiam?

Colleen Saidman: Yoga has already become main stream. But I envision it being way more main stream—offered in every school, in every corporation, and at every hospital. Rodney and I are very involved in making this happen through Urban Zen. Gaiam really wants to make the world a better place—for everyone to be armed with the yoga tools that will make that happen. Gaiam has always been a little ahead of the game, and as the game goes digital, they’re already there. Gaiam is a pioneer. We’re honored to be affiliated with them. 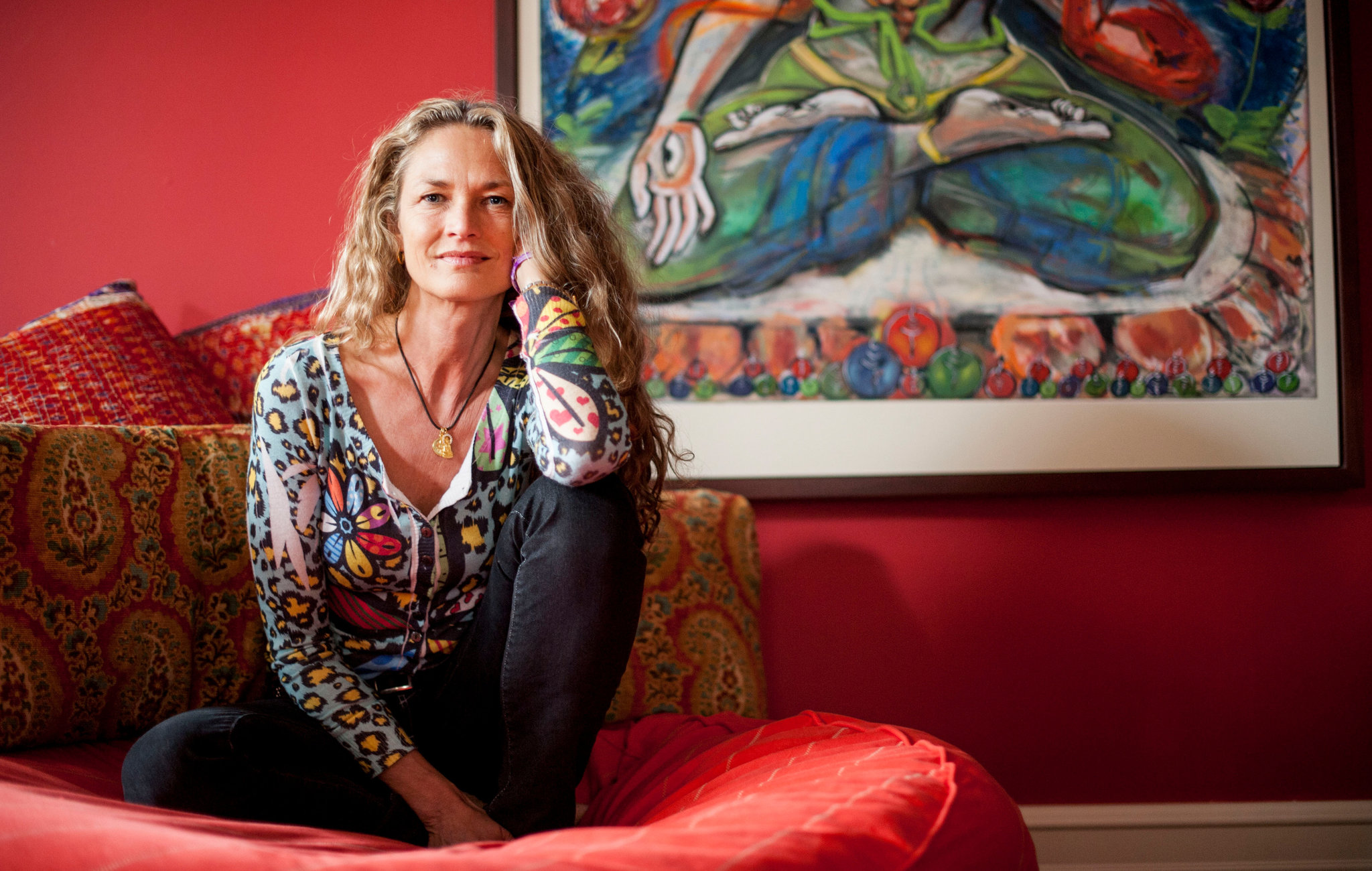