Changing the Impact of Touring from Red to Green

Adam Gardner and two fellow college students formed the band Guster in the early 1990s. Adam and his girlfriend (now wife) Lauren Sullivan were environmentalists, and when Guster started touring, Adam realized that their touring practices contradicted their green values. “Everything was disposable, we were running around in these fuel-guzzling buses and trucks, there was tons of garbage on the ground after the shows at the venues, there wasn’t recycling, it was just a mess,” shared Adam. “I complained to Lauren a lot after returning from tours about the negative environmental impact of my job. And when I talked with other bands, I realized that a lot of them felt the same way. We felt horribly guilty about our environmental footprint on the road.”

When Lauren pondered Adam’s problem, she realized that music concerts could be used as powerful environmental platforms. Said Lauren, “It was great that those of us in environmental circles were doing terrific work around the world, but we weren’t necessarily branching out to talk to every-day citizens. I got excited about the possibility of being able to communicate with people and let them know about the environmental efforts that were going on around them.” With this perspective, Lauren connected with the Barenaked Ladies/Alanis Morisette “Au Naturale” tour in 2004, and thus REVERB began.

Lauren named the organization REVERB with the idea that a message of environmental support would come from the artists on stage and reverberate out to the fans, who would hopefully follow suit. REVERB set out to help bands minimize the environmental impact of their travels. This allows the artists to lead by example, so they can then turn to their audiences and say, “Hey, we got here in bio-diesel powered busses, and tonight’s show is completely powered by renewable energy. In your lives, consider renewable energy options, and think about how your travel has an impact on the environment.” The bands let their fans know that REVERB is a sanctioned part of the concert experience, and they encourage their fans to consider taking individual actions that collectively add up to large impact. And when fans are in a really great mental state at a concert and they hear that their favorite artist cares about environmental issues, it can yield significant change.

REVERB’s volunteer force, their “boots on the ground,” has a positive impact on fans as well. Across the country, REVERB has thousands of people who volunteer at concert eco-villages. These volunteers are the street team that connects REVERB with fans, letting them know that the eco-village is there and how they can get involved. They’re a huge part of REVERB’s efforts.

REVERB has been working with bands for over 11 years.  During that time they’ve joined 166 tours, reaching approximately 20 million fans. Their messages currently reach about 3 million concert goers per year. 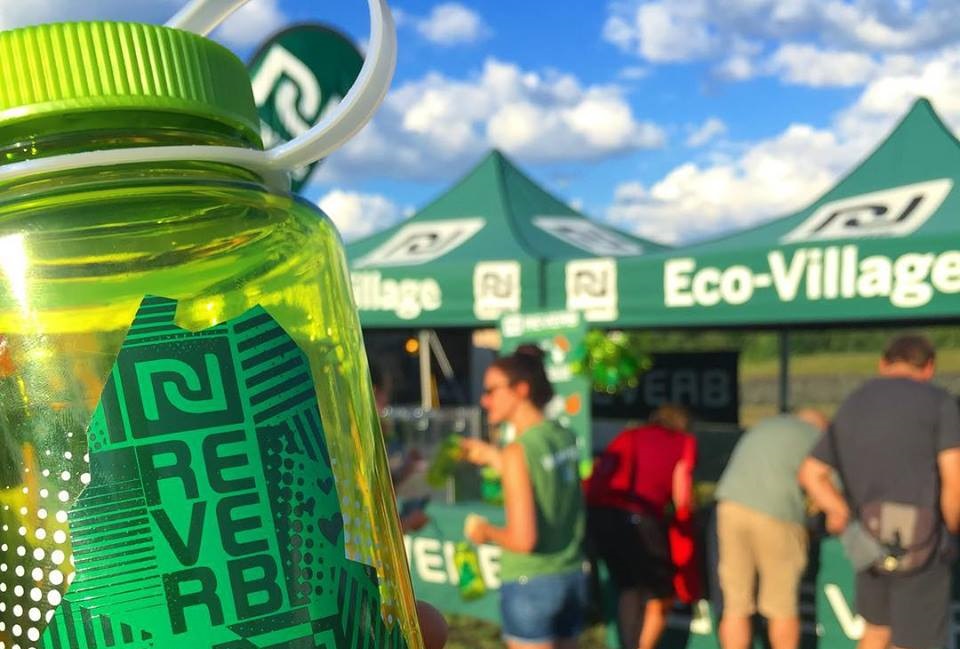 From Farm to Family

REVERB has had significant impact beyond reducing band footprints and encouraging eco-mindedness. For example, this past summer REVERB had great success with the Farm to Family program on the Dave Matthews Band tour. With this program, a fan made a donation of ten dollars, and in return the fan received a reusable water bottle and free water refills from filling stations. The donations were given to a local farmer, who the fans were able to meet at the eco-village. The farmers used those donations to grow food for local shelters and food banks. So with one ten dollar donation, the fans reduced the use of plastic, supported farmers, and fed hungry people, all while they saved money on water at the concert and received a souvenir water bottle. The program raised over $107,000.

It’s not always money that REVERB raises; sometimes the organization supports fan connection to environmental groups or encouraging people to support a cause. In a recent tour, Adam’s band Guster supported a text campaign called Change the Course. For every person who pledged to shrink their water footprint by sending a text, corporate sponsors of the program provided funding to restore 1,000 gallons of water to the Colorado River Basin. In a 2.5 week tour, Guster fans contributed more than 1 million gallons of water. (This campaign is ongoing – you can help support this cause by texting “river” to 77177.) 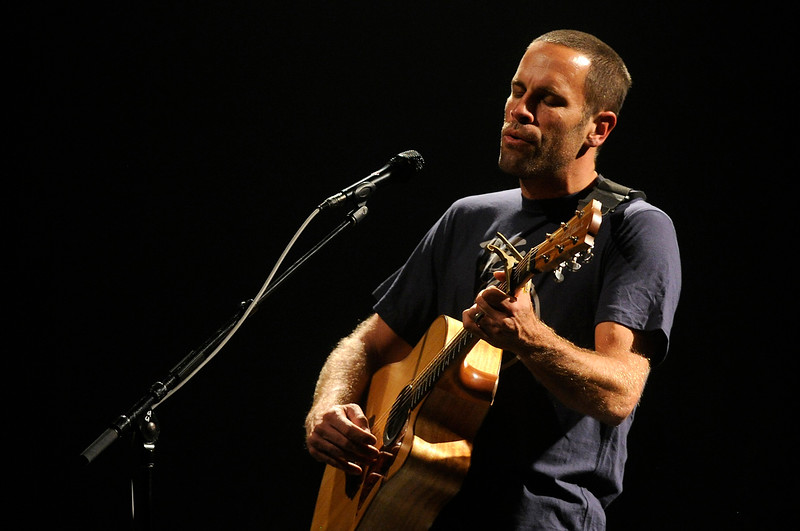 In addition to joining forces with the tours of stars like Dave Matthews or Jack Johnson, REVERB has also organized its own series of Campus Consciousness tours. These concerts are combined with all-day campus events which focus on supporting students and their eco-minded organizations.

The first Campus Consciousness tour was held in 2006, and REVERB has seen a deepening of the understanding of environmental issues on college campuses over time. Said Adam, “In 2006 there was a lot of, ‘What’s biodiesel? What’s sustainability?’” But now, campuses are now leading the way in environmental issues. It is at these institutions of higher education where studies are being conducted, and environmental leadership is being driven by these campuses in many ways. Lauren shared, “Campuses have really become a hotbed of great environmental work, and it’s exciting to be able to support that. Now when we interact with the students, we have great conversations. Campus Consciousness gets to shine a light on all of the incredible work that groups on campus are doing.”

But at the same time, many students across college campuses are not aware of some of the amazing eco-oriented things that are happening. Campus Consciousness significantly raises this awareness, and even adds a cool factor to it. Adam Shared, “You know, the students doing the eco-work aren’t necessarily considered the coolest kids on campus. But when you take the energy and excitement of Drake coming onto campus and having him shine a light on all of the good work these students are doing, that totally changes the perspective.”

While many of REVERB’s undertakings are tour based, they also work off-stage on issues such as illegal logging.  Adam originally became aware of this issue after the Gibson Guitar raid in 2011. Said Adam, “I realized that after all these efforts that we’ve been doing with these artists to keep their tours green, it’d be pretty ironic if the very instruments that we express our music through were created from wood ripped out of a world heritage site using child labor.” Adam became involved with the Environmental Investigation Agency, and testified in congress in May, 2012 on behalf of REVERB and a large list of artists in support of the Lacey Act, which bans import and trade of illegally logged wood.

In addition to testifying in congress, REVERB has worked on a public-facing campaign with the Environmental Investigation Agency and has used their eco-villages to raise awareness about illegal logging. This month, as an extension of REVERB’s partnership with the Environmental Investigation Agency, Adam and Lauren are accompanying members of Maroon 5 to Guatemala to see the rainforests firsthand and understand the impact of illegal logging.

“It’s entirely unnecessary,” Shares Adam. “Look at Bedell Guitars. Tom Bedell is like my hero, he’s such an amazing advocate and business activist, and his guitars sound amazing. Guster plays them exclusively on stage because they’re incredible instruments, and they are a perfect example of how great guitars can be created sustainably. You know, the most eco-friendly guitar in the world doesn’t mean anything if it doesn’t sound good, but Bedell Guitars are proof that amazing sound can be created with sustainable sourcing.” 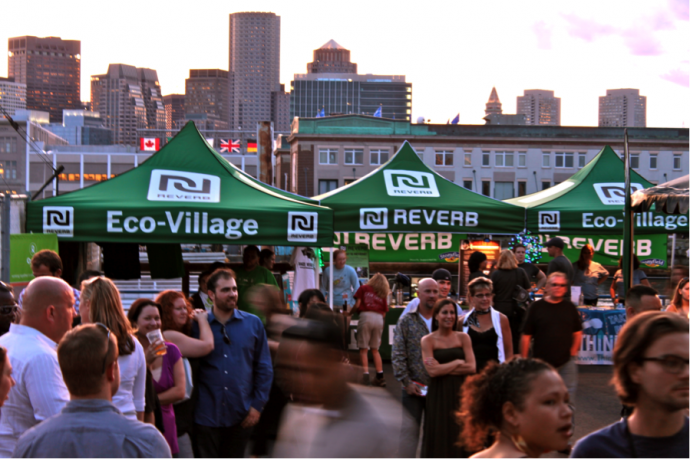 When we asked Adam and Lauren how they would like to see their fans become more involved, Lauren shared, “Something that Adam and I always talk about is ‘sphere of influence.’ Who are you connected to? Are you a stay-at-home parent who is connected to a PTA, or looking at household products? If you work out in the world, what can you and your co-workers do? Look at the Venn diagram in your life, and discover where can you exert some positive influence on what is happening in your world.”

“But even little things – buy an eco-friendly lip balm, that’s a step along the path. Do something and being a part of the force that moves us all along the path. Everyone doing something is better than just a few people doing everything. That is the model that we’re built on. We’re seeing millions and millions of people taking small actions that really add up.”