Serendipity is a word not often associated with Haiti. The country became the world’s first black republic when former slaves fought the French to gain independence in the 1800’s, but it was saddled with $90 million in debt demanded as retribution for French losses. Since that time the country has been plagued by political instability and corruption, and has suffered crippling blows from hurricanes and earthquakes.

Sadly, another problem in Haiti was created at the hands of its inhabitants. The Haitians did not understand the value of standing trees; they cut them down for use as charcoal (Haiti’s primary fuel source) until the once-tropical forest landscape became barren. Without trees to help regulate the flow of water, towns became prone to flooding and mudslides, and investment in infrastructure became, for all intents and purposes, pointless. With the changes in its environment, Haiti earned the dubious distinction of being the top-ranked country in the world at risk for climate disaster.

The United States sponsored planting of 100 million trees from 1980 to 2000, but those trees are mostly gone because the Haitians saw more value in using them to create charcoal. In addition, The United Nations spent $20 million over a period of 10 years on reforestation, yet the country remained ninety percent deforested.

Hugh Locke spent his life working on humanitarian efforts. In 2005, Hugh helped to found Yéle Haiti, an organization that sought to help Haiti through programs in education, sports, the arts and the environment. While Hugh was in Haiti, he became troubled by the lack of trees. Through connections Hugh met Timote Georges, a Haitian-born agronomist with a passion for replenishing Haiti’s trees. Together Hugh and Timote came up with the idea of paying farmers to plant trees and look after them until they were mature, but they needed a sponsor.

In 2009, Margaret Morey-Reuner was working for Timberland in Global Brand Marketing. Timberland had just planted its one millionth tree in China. While Timberland was pleased with their success, the company wanted to shift their efforts to a closer locale so they could effect change more expeditiously. Timberland had a factory in the Domincan Republic, which made them aware of the need for trees in Haiti. A member on the board of directors of Timberland knew of Yéle Haiti, and connected Margaret to Hugh and Timote. Said Margaret, “The way we all came together for this effort was truly serendipitous.”

A Model for Sustainable Forestry

While Timberland was certainly successful planting trees in China, they undertook the effort without a pre-planned exit strategy. Since they were beginning a new initiative with Haiti, they wanted to do things differently. Margaret proposed to Hugh and Timote, “What happens when the funding runs out?”

Together Hugh and Timote pondered this problem, while also trying to identify the root cause of why prior efforts didn’t work. The sustainable model they developed was nothing short of genius. 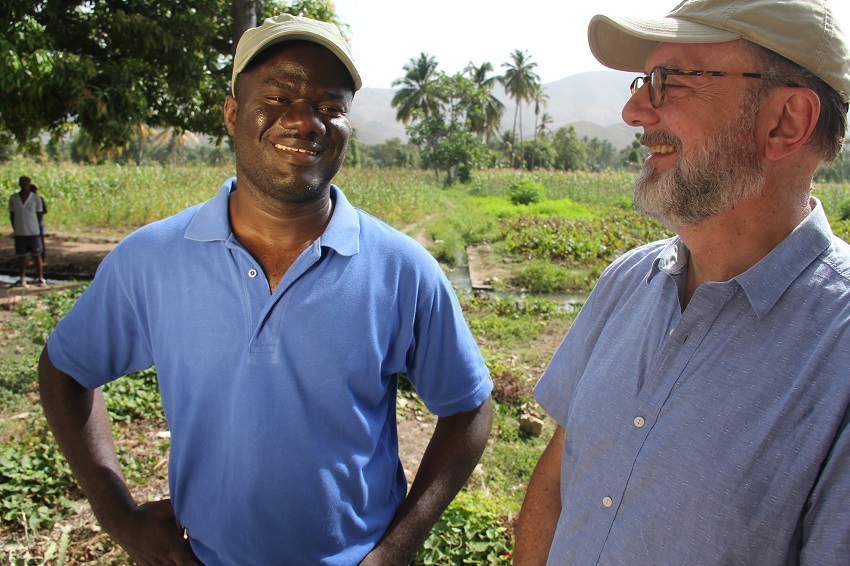 Timote and Hugh – the fathers of the sustainable forestry program in Haiti.

Haitian Farmers would be hired to raise trees in nurseries. Once they had grown adequately in the nurseries, the trees would be planted in the farmers’ own land. These trees would help the farmers to fight erosion, provide shade, create borders, and yield food. In return for working in the nursery, the farmers would also earn agricultural benefits: they would be loaned high quality seed, tools, and training to better their farming efforts. These inputs would improve the farmers’ yields and income while reducing their operating costs. As part of the program, the farmers were also required to volunteer time for sponsored tree planting initiatives in the community.

Sustainability was built into the model so that it could keep going, as Margaret suggested, when the funding ran out. At the end of the harvest season, farmers would be required to return the equivalent amount of seed they had borrowed from the program, so that the program would be able to help new farmers the following year without having to purchase new seed.

Timberland immediately bought in to Hugh and Timote’s plan. In fall, 2009, the company set a goal to plant 5 million trees in five years.

Despite this hurdle, the program had an auspicious beginning: participation by local farmers in the inaugural program in Gonaives, Haiti in February was three times greater than expected. In fact, when the initiative was barely up and running, farmers from neighboring communities visited the upstart in Gonaives to ask when the program could be bought to their communities.

Not long after the program began, it faced yet another problem: Yéle Haiti was accused of fraud and mismanagement of funds. Thankfully, Timberland agreed to stick with Hugh and the program if Hugh left Yéle Haiti and could take the tree planting program with him. Hugh was able to successfully extract the tree program from Yéle Haiti, and he and Timote formed a new organization, the Smallholder Farmers Alliance (SFA).  The program’s first trees were planted in June.

In the words of Timote George, “Nothing in life is easy. If it’s easy, it’s not an objective.” With this perspective, the trio of Hugh, Timote, and Margaret/Timberland pressed on, and they can now claim victory beyond their wildest expectations.

Five years later, the SFA has 3,200 farmer members who have cared for 19 tree nurseries and have planted over 4.9 million trees on 6,300 acres of land. Anecdotal evidence shows that the farmer’s crop yields have increased by 40 percent, and their household income has increased by 50 percent. 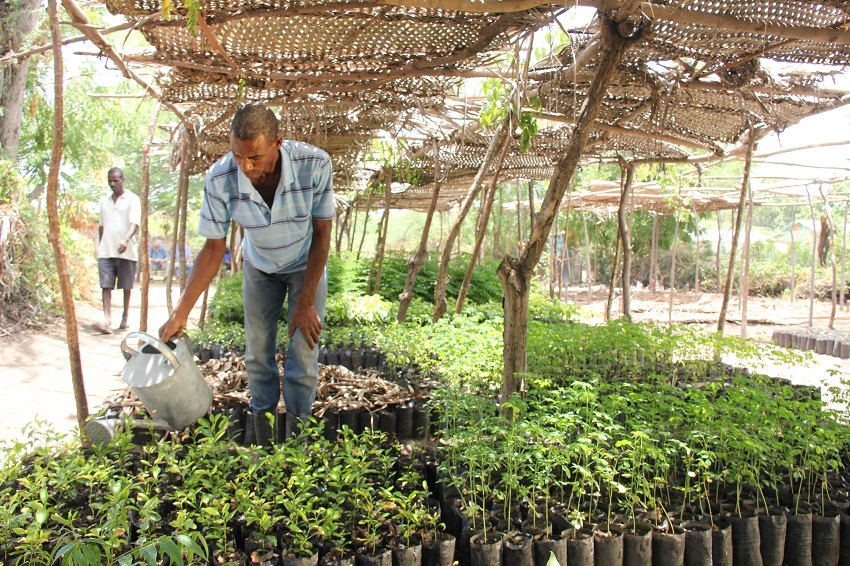 A farmer fulfills his promise to care for trees in one of the program’s many nurseries.

Beyond that success, the model has led to developments that weren’t even planned. The farmers’ increase in income has allowed them to pay to send 3,400 more of their children to school. A successful supply store for the farmers has been established, as well as a micro-credit system. The World Bank recognized the program as “the best value chain in Haiti,” and has met with program leaders to learn more about the program’s success, and the Smallholder Farmers Alliance is developing a consortium with the University of Tel Aviv, University of North Carolina Chapel Hill, and University of California Berkeley In order to develop standardized systems to assess the impact of smallholder farming.

Even more gain will be realized via spinoff for-profit companies being formed to export tree products. Timberland, with the help of the Clinton Foundation, has supported the identification of market solutions for SFA farmer outputs. For instance, one of the twenty-five varieties of trees planted in the Timberland program is the moringa oleifera. Moringa may prove to be the world’s next superfood. Moringa leaves have been used in traditional medicine in many cultures, and the modern scientific community has begun to validate many of these claims. The leaves have more protein per weight than beans, and also contain calcium, iron, Vitamin C and Vitamin A. Timote will tell you that he uses the leaves from his own garden to make tea for his children if they have fever or flu, and it works. Two products can be made from the moringa tree: the leaves can be dried and turned into powder for consumption, and oil extracted from the seeds is valued by the cosmetics industry. You can expect to see Moringa Superfood Energy Shots made by US company Kuli Kuli with Hatian moringa in Whole Foods stores in January, 2016. Once that initiative is up and running, SFA will turn their attention toward exports for cosmetics.

Another product to be exported is lime oil. Haiti was once a significant exporter of lime oil, but embargos in the 1990s halted these exports, and the trees were cut down. Hopefully Haiti will see success with this export again: the SFA has been introduced to a company who is building a lime oil extraction plant in Haiti and plans to re-introduce lime oil extract as a commercial export. 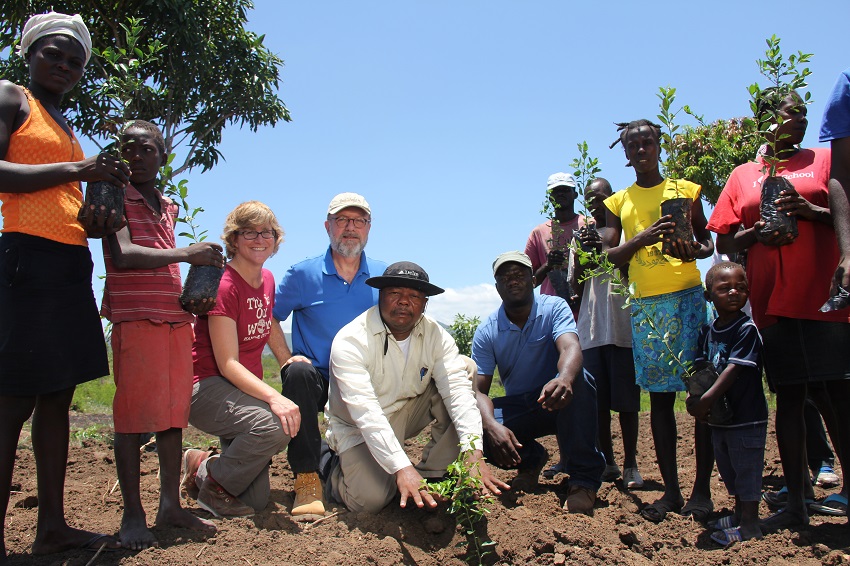 Margaret, Hugh, and Timote enjoy the fruits of their labor as more trees are planted.

In fact, benevolent giant Timberland may benefit in the end from its own goodwill project. Timberland is considering replicating the farming model in Haiti with cotton and rubber crops, so that Timberland can become a customer of the farmers and use their cotton and rubber in their own products. It seems only but right that Timberland should benefit from this program. Said Hugh, “If it wasn’t for Timberland forcing me to tear up my NGO card and create a sustainable model for this program, we would never have experienced this level of success.”

Margaret shared, “We are fortunate that we had the foresight of wanting to create a documentary about this undertaking. We figured if this worked or it didn’t work, it would be an incredible story to tell, and there is as much to learn in success as there is in failure.”

The documentary is named Kombit: The Cooperative. Kombit is a Haitian word that means “work party.” In a kombit, farmers come together to work side by side on a common task, and the farming community becomes an extended family. The tradition of kombit has devolved in Haiti, but the Timberland/SFA program has made great strides toward resurrecting community ties.

The documentary is premiering at SXSW Eco in Austin, TX on October 5, 2015. Consumers can visit KombitFilm.com to learn more and purchase the film, which will be available nationwide for download and streaming beginning October 6, 2015 for $2.99 (48 hour rental) or $9.99 (purchase and download). All net proceeds from film purchases will be directed to Impact Farming (a U.S. non-profit organization) to benefit the Smallholder Farmers Alliance in Haiti.

Check out the trailer for the film below: